Thanks to Ken Bone, we finally have some insurance clickbait

Insurance doesn’t get a lot of mainstream airplay, which means we don’t get a lot of opportunities to write anything in the realm of "clickbait" about insurance. I mean, sure, maybe you thought "Can a family history of cancer affect my life insurance rates?" was just clickbait, but that would just show that you have no understanding what the word clickbait means.

Anyway, in case you have no idea who Ken Bone is, here’s quick rundown:

Ok, I missed a step in between those last two line items. After Mr. Bone asked his question to Clinton and the Donald, the internet fell in love with Mr. Bone, and like many people in love, went a little crazy. They turned him into what experts call a "living meme," which basically means that he is a real person who has to deal with the consequences of millions of people creating jokes around and about an imagined persona. For example: 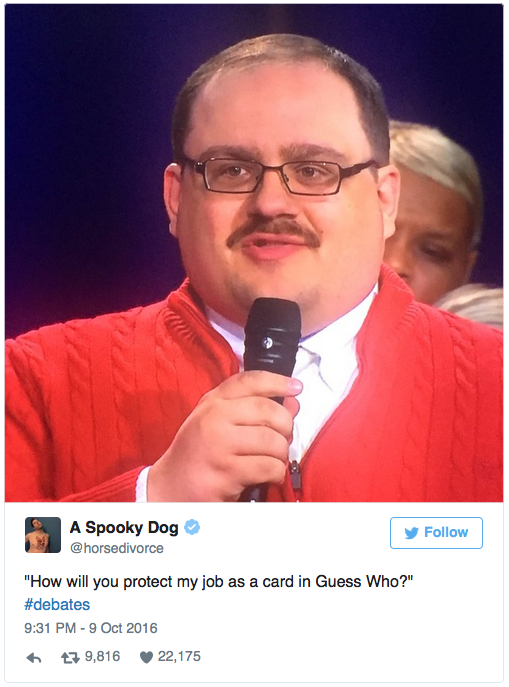 The internet fell out of love pretty quickly after Mr. Bone took part in an "Ask Me Anything" session on Reddit on October 14th. Bone didn’t say anything particularly unsavory during the Ask Me Anything, but because he used his real Reddit account, internet sleuths (a.k.a. people slacking off at work) were able to sift through his entire comment history on Reddit.What they found in those comments was, to quote The Daily Beast, "disturbing." Most were normal, some were unsavory, others were left on pornographic materials. One comment from four months ago defended the guy who killed Trayvon Martin, so, like many white people, it was perceived that he doesn’t really understand white privilege.But none of this answers the question: why am I, a lowly writer of informational insurance and personal finance content, writing about Ken Bone’s Reddit comments? Read and it weep:

ARE YOU SERIOUS, KEN!? You committed insurance fraud!? How did you get through the screening process!? How were you allowed in a room with president candidates and their families!? How do we know you didn't steal their ID badges so you could make MS Paint drawings on them!?Ahem. Sorry, lost it there for a second. Insurance fraud is one of those things you definitely shouldn’t do, even if you’re a pizza delivery boy. It’s not even one of those "cute" felonies, like taking a fake sick day or being a journalist with an anonymous source.I don’t know what the statute of limitations are on insurance fraud, either, but I do think that Ken Bone should be exempt from prosecution. Why? Two reasons: One, because he gave us a great reason to write insurance-themed clickbait, and two, because being a living meme is punishment enough. Sorry, Ken. Your life is officially ruined. Hope it was worth it to take a few disposable photographs with the candidates.P.S. If you ever get Ken Bone’d and become a living meme, delete everything you’ve ever done online. Seriously.