I'm a virtual Santa Claus. Here's how I budget

The days of sitting on Santa’s lap and posing for a picture at the mall are gone (for now). Now, Santa wears a mask and sits behind a shiny plexiglass wall. Or he’s video chatting from a room that looks just like Santa’s workshop at the North Pole — you may even get a virtual cameo from an elf.

Last year, we talked to New Hampshire native Dan Greenleaf to get an inside look at the life of a professional Santa Claus. We recently caught back up with him to see how COVID-19 has changed the business of being Santa Claus.

In a normal season, Greenleaf typically books 80 to 90 events. His most lucrative gigs are holiday parties in hotels, offices and country clubs. He also books about 150 events for other Santas in New England with his business ImSanta.org. But this year, the majority of in-person Santa visits are canceled because most companies can’t host large parties due to the pandemic, he said. He estimates his total business revenue will drop more than 50% this year.

Even though Santa season only stretches from Thanksgiving to Christmas, Greenleaf embodies Santa Claus throughout the year. “The hardest part is living up to Santa’s reputation. He even sports the license plate “IMSANTA.” Here’s how the pandemic has changed his finances and role as Santa Claus.

How is this year be different?

Last year, Greenleaf and his Santas worked 44 in-person events on the first Saturday in December. Now their schedule may consist of only six events on a single day.

To offset costs, Greenleaf cut back on bookings and slightly raised his rates. He charges $275 per hour for a new booking, whether in person or virtual. He discounts his rate for returning clients and nonprofit organizations. He’s projecting $25,000 in total revenue from his business this season.

Not every in-person visit is canceled. Some country clubs are allowing drive-by visits with Santa for members. Greenleaf will appear in-person as Santa at Bass Pro Shops and Cabela’s under new safety guidelines.

“We have plastic or plexiglass walls that separate the children and Santa. Families have to wear masks and are screened when they arrive,” he said. Bass Pro Shops and Cabela’s are requiring customers to make reservations to see Santa to control crowd size.

He’s also making up for lost income by doing a mix of home and virtual visits. Families can book Greenleaf to read stories, sing songs, do magic tricks and answer questions from kids. When Greenleaf does a house visit, he and the family wear masks, only posing maskless for socially distant photos.

“In some ways you can do things on a virtual visit that you can’t do on a home visit,” he said. “You can use it to show them what it's like at the North Pole, have a prerecorded video of another elf telling jokes or demonstrate your toolbox.”

What does it cost to be a virtual Santa?

To make virtual visits more authentic, it helps to create a physical space. Greenleaf created a set that looks like Santa’s workshop. Most virtual Santa booking sites like HowToSaveChristmas.com and JingleRing.com require their Santas to have a physical set, greenscreen or high-definition interactive virtual background, said Greenleaf.

There’s a significant upfront cost to turn a regular room into Santa’s office, he added. It takes everything from studio-quality lights, a real bookcase, scattered toys and a convincing background wall. You’ll also need a webcam, tripod and up-to-date computer. Greenleaf paid $500 for set-up and decoration and $1,500 for a fast new Dell desktop computer. He also upgraded his internet and router for an additional $45 per month.

Even though he’s doing mostly virtual visits, Greenleaf has liability insurance because “even in a virtual visit, something could happen.” It costs him $180 annually. He also wears a full Santa suit.

“If I wanted to get up and reach something off the top shelf, I don’t want to be wearing blue jeans or Bermuda shorts,” he said. A standard Santa suit can cost as low as $100 and as much as $600 for a professional-grade ensemble. Greenleaf is a real-beard Santa, but a theatrical wig and beard can cost up to $1,500.

Greenleaf is retired and his wife, Diana, generates income throughout the year as a school librarian. He aims to make enough revenue during Santa season and selling things on eBay to help cover annual expenses. He estimates their combined monthly income is $6,000 to $6,500 throughout the year. 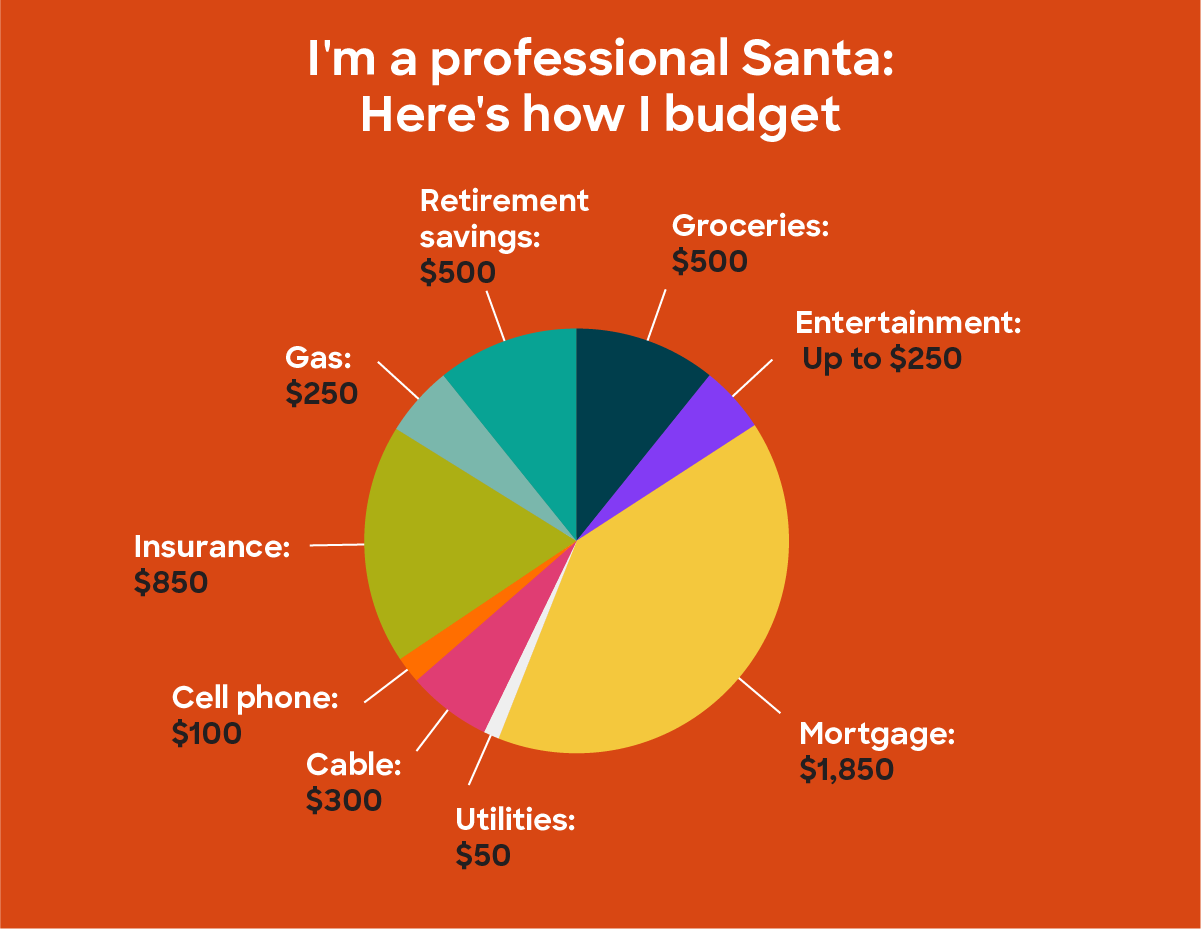 Entertainment: Before the pandemic, Greenleaf and his wife ate at restaurants, saw movies and went to concerts for an average of $250 per month. Now “it’s a fraction of that,” he said. Any money they spend for entertainment now goes towards streaming services, books and takeout.

Cell phone: He shares a family plan with his children. His share of the bill is $100, which also covers his business.

Insurance: The couple spends about $1,000 per year on home insurance and $100 per month on car insurance for Diana’s Prius. Greenleaf buys about $8,000 of insurance for his car and liability coverage through his business. That's about $850 per month.

Gas: Before the pandemic, Greenleaf was spending around $250 for gas monthly. His gas bill would spike $200 during a normal season of Santa trips. Lately, Greenleaf and his wife are making shorter and less frequent trips, cutting their gas bill significantly.

Savings: Greenleaf is retired and Diana plans to retire after this school year. She puts away $500 per month for retirement.