Hulu with Live TV review: the best option for cord-cutters?

Updated September 18, 2020: Internet TV is a small but growing category of streaming services, with companies across the tech and entertainment worlds trying to get a foothold. Hulu, a tech company owned by entertainment companies, entered the space in 2017 with a highly specific vision of what live TV should look like in the future. First and foremost, Hulu with Live TV (yes, that is the real name) wants to re-contextualize your television experience by divorcing shows from networks, and in turn, create a more personal television experience.

What is Hulu with Live TV?

Hulu with Live TV is an over-the-top internet TV service. Over-the-top, in this context, does not mean Hulu is dramatic – instead, it means you’re getting it on top of your normal internet service, as opposed to bundled alongside it. The service provides about 50 live TV channels, cloud DVR and the full library of Hulu content, including classic shows and originals. All of this starts at $39.99 per month and is accessible through the Hulu app on most smartphones, Apple TV, Roku, Xbox One and more.

If you want to compare Hulu with Live TV to its competitors, take a look at Sling TV, Playstation Vue, DirecTV Now, and YouTube TV. It’s difficult to do an apples-to-apples price comparison between these services – channel availability varies, as does the the look and feel of the service.

What channels does Hulu with Live TV have?

Unlike cable and other internet TV services, Hulu with Live TV does not have multiple channel bundles – you get all of the channels they offer, with the exception of premium networks. HBO, Cinemax and Showtime are available at their standard monthly fees.

You can view the full list of channels available below: 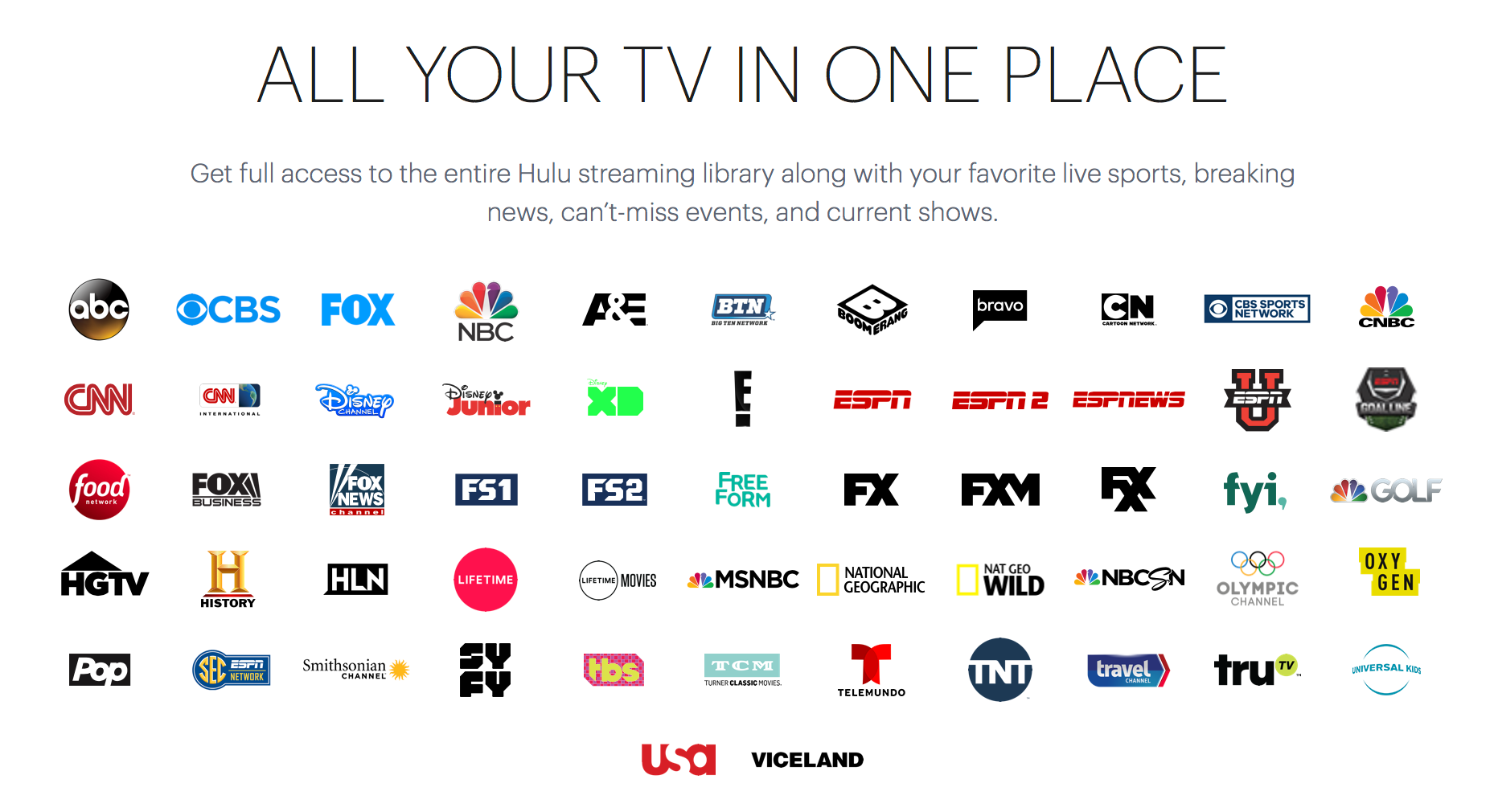 Some big channels that are missing: AMC, all of the Viacom channels (Nick, Comedy Central, MTV) and the Discovery channels. However, many of these channels are also missing from Hulu’s competitors – it’s on the networks to start playing ball with this new category of service. Additionally, Viacom content is available on-demand, despite not participating in the Live TV service.

Hulu with Live TV offers local ABC, NBC, CBS and Fox channels, though because ownership of these stations is decentralized, Hulu may not have a deal with your local channels. Go to its site and click “View all channels in your area” to confirm which of your local channels are available.

How many people can watch Hulu with Live TV at once?

You can watch Hulu with Live TV on two screens at once. If you have a few kids with phones, tablets, game consoles and a big family TV in the living room, you may need to upgrade to the Unlimited Screens add-on, which is $14.99 per month. Unlimited Screens allows you to watch on any number of devices connected to your home Wi-Fi network and up to three mobile devices while on the go.

Like Netflix, Hulu allows you to create profiles for different viewers in your household (up to six). Each viewer can choose their favorite shows and sports teams, and keep track of where they are while binging a series.

What’s it like to actually use Hulu with Live TV?

Hulu with Live TV does a better job than your average cable box of making television feel personal. When you first open the app, you’re presented with your “Lineup” – basically, suggestions on what to watch. With Lineup, Hulu wants to blur the lines between live content and its extensive back catalog as much as possible. The intention is to create an experience that divorces shows from their networks – if an episode of your favorite sitcom is live now, the app will present that upfront instead of making you hunt for it in a giant grid of networks and shows.

While I appreciate this for shows like Property Brothers — which I’m happy to jump into at the middle of a live episode of — it doesn’t work as well for a show I’m binging. For example, my girlfriend and I are binging Bob’s Burgers. We’re in the middle of Season 3, so I don’t really want to be told to go watch an episode from Season 5 just because it’s live right now.

If you swipe right, you’ll find curated selections of content which are often better than your Lineup, including a “Keep Watching” screen, a list of your favorite live channels and movies. You’ll also find seasonal suggestions, such as “Winter Premieres.”

All of that lives under the “Home” screen, but there’s a lot of content hidden under the “Browse” tab. For example, the only way to get to a full grid of every live network is to visit “Browse” and then hit “Networks.” It’s bizarre how hidden away this is, considering you’re paying almost $40 for a service with “Live TV” in the name. 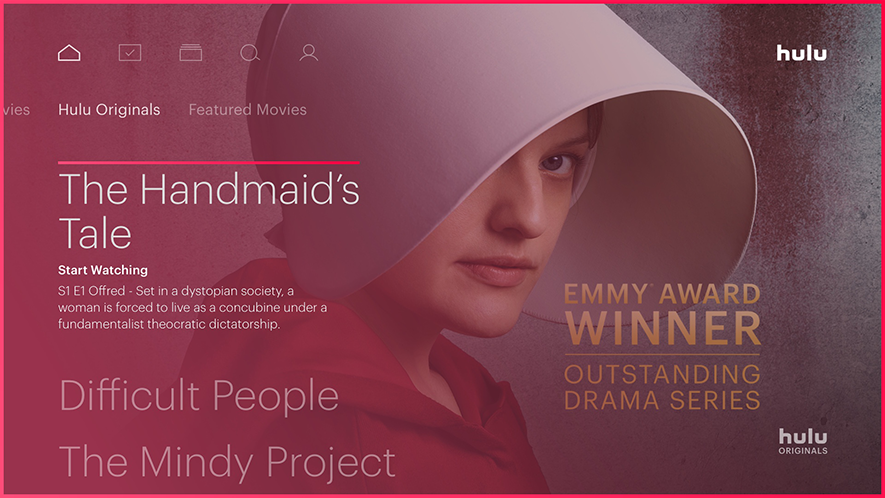 Hulu says they’re going to launch a Live TV guide and improve their suggestions and curation this spring – you can read more about it at Techcrunch – but for now, these two marquee features feel a little half-baked.

I have to give Hulu points for trying something different, however. Almost every other internet TV service just gives you the same basic guide interface you could find on any cable box (notable exception: YouTube TV). While Hulu with Live TV isn’t perfect, it’s much nicer to look at and use than those services. I’d rather pay for a service with some imagination than a company just trying to sell you cable TV without the box.

And while I’m not a fan of watching TV on my phone, the Hulu app scales nicely from televisions to tablets to phones. When using Hulu with Live TV on your phone, it feels like you have your entire television – live channels, DVR, on-demand content – in your pocket. 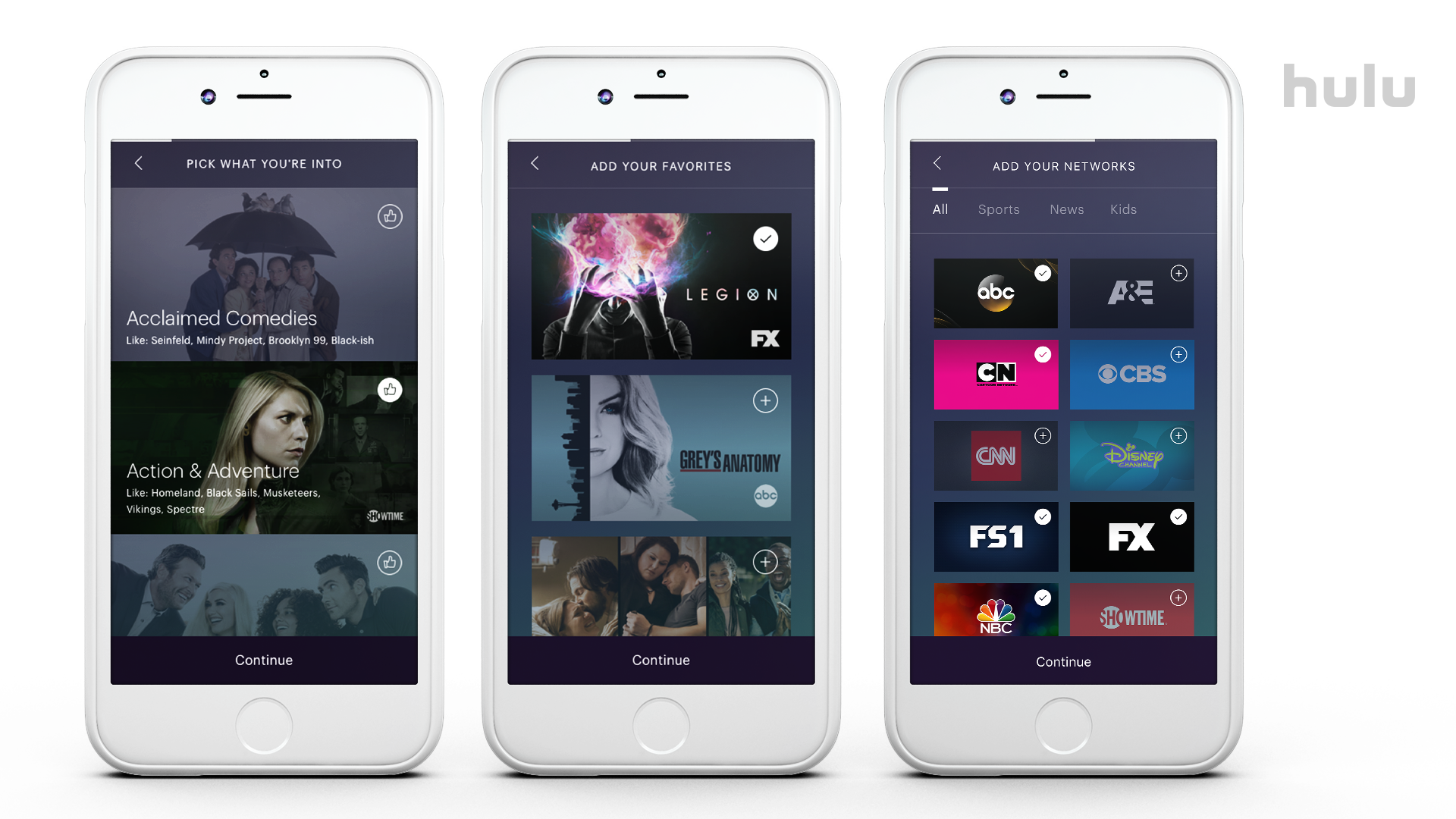 Is Hulu with Live TV reliable?

In short: yes. I’ve only had a few odd issues with live TV freezing and no issues with on-demand content.

How is Hulu with Live TV’s DVR?

Hulu with Live TV comes with 50 hours of cloud DVR storage. You can expand the DVR to 200 hours and add the ability to fast-forward through commercials for an extra $14.99 per month.

Adding content to your DVR is as easy as adding a television show or movie to “My Stuff.” However, this means that anything you add to “My Stuff,” even if you’re just bookmarking it for easy access later, gets recorded to your DVR. I made the mistake of adding Shark Tank to My Stuff so I would see it in my Lineup. A week later, my entire DVR was full of startup pitches.

Verdict: Is Hulu with Live TV worth it?

If you’re an existing Hulu subscriber looking for an internet TV service, adding a Hulu with Live TV subscription is a natural fit: you’re already paying $7.99 for the Hulu library, and another $30-odd dollars for Live TV is in line with competitors.

But if you’re not a Hulu subscriber, or you don’t see the value in having the Hulu on-demand library, you should compare all of your options. The beauty of internet TV services is that they are month-by-month subscriptions that can be started and stopped at any time. If Hulu with Live TV doesn’t work for you, try a competitor, or vice-versa.

I tried both Sling and DirecTV Now for extended periods of time before settling on Hulu with Live TV. I chose Hulu because it was reliable, easy to use, and I had access to a wide variety of on-demand content.

Admittedly, Hulu can be more expensive than its competitors. It starts at a higher price than Sling, YouTube TV and DirecTV Now, and while it doesn’t force you pay more to get basic channels, premium add-ons like Unlimited Screens and Enhanced Cloud DVR are costly. With all of the add-ons, including premium channels, you can easily end up spending over $100 per month.

(Aside: The “No Commercials” add-on is totally worth it, though – for only $4 per month, Hulu cuts out the commercials in the vast majority of on-demand content. Live TV still has commercials, but that’s half the charm of live TV, anyway.)

In the end, though, Hulu with Live TV offers a well-rounded selection of channels and on-demand content, and is a good fit for a wide variety of cord-cutters out there. Other services might be cheaper, but Hulu with Live TV is an incredible value for what you’re getting.

Your money, recession proof. Get the free e-book when you sign up for Easy Money by Policygenius.