How much it actually costs to own a Tesla

Tesla cars go fast, they don't use gas and have few moving parts to break. They contain no liquids except wiper fluid.

Get Easy Money in your inbox each Friday.

Part of the appeal of a Tesla is it's a high-end car. You get luxurious interiors and advanced technology with your purchase. Owners also save on fuel. Tesla has a calculator on its website to tell you exactly what you save. Plus, customers currently get a $1,875 federal income tax credit — though it goes away after 2019 — and some states offer further incentives.

Is it worth it? We wanted to find out the real cost of owning a Tesla compared to other cars. (You can pull car insurance quotes for your current ride here to see how it stacks up.) 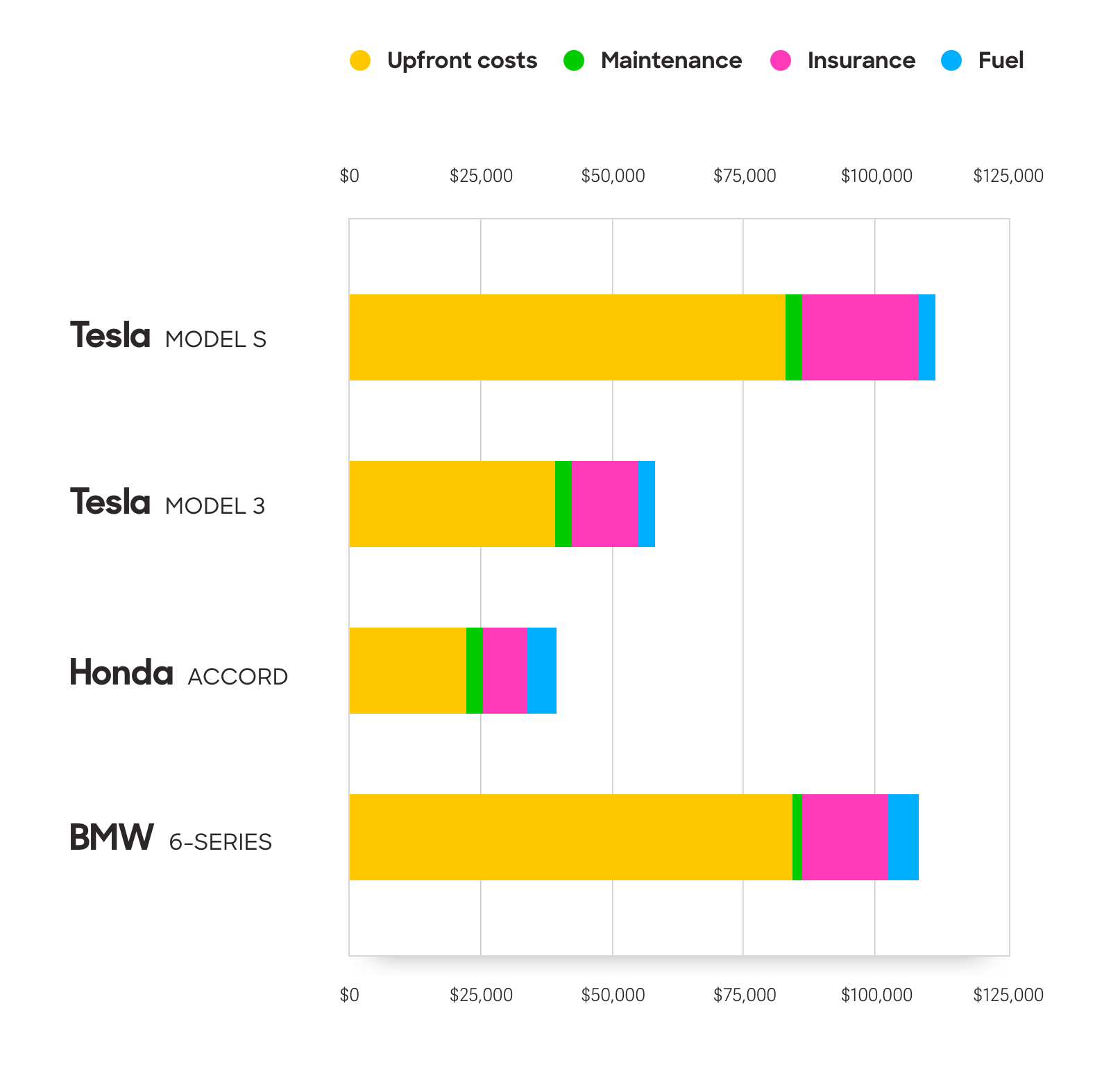 The cost of owning a Tesla

Our comparison includes the Tesla Model S and Tesla Model 3. We compare them to the BMW 6 Series, a luxury sedan comparable in price to the Model S, as well as the Honda Accord, an affordable and reliable car I drove from high school until it finally died a few years ago. We used all 2017 models.

We compared upfront costs as well as the cost of maintenance, insurance and fuel over five years. The initial sale price is based on inventory available near my home in northern New Jersey.

For the Model S, I based maintenance costs on the price of a four-year Tesla maintenance plan ($2,400) stretched out to five years. Model 3 maintenance plans aren't available yet, and Tesla didn't respond to request for comment on their official price. But, for the sake of comparison, I lowered the cost of the standard four-year maintenance plan by $100, given the Model 3 is a cheaper vehicle.

For the cost of auto insurance, I made up an identity for the purpose of getting apples-to-apples auto quote comparisons for all four cars. (You can compare auto insurnace prices with Policygenius here.)

The quoted prices are for John Smith, a single 40-year-old hotel manager living the dream in northern New Jersey, where, it should be noted, insurance is quite expensive. I got quotes from Progressive, Liberty Mutual and Geico. Geico gave me the lowest quotes, so I used their numbers in the comparison. Aside from the cars and the resulting premiums, all the insurance plans compared were identical.

Here's a primer on insurance for Teslas.

Here's the cost breakdown dollar-by-dollar in each category.

What stands out the most is the price of insurance. A Tesla Model S owner will spend $25,000 insuring their car over five years. Part of that high price tag is high New Jersey prices, but it's double what the owner of a BMW 6 Series would pay in the same area.

I asked Kelley Blue Book how my insurance numbers compared to theirs. The Model S wasn't significantly more expensive to insure than other luxury cars based on their data, but there could be reasons why a Model S would cost more to insure, said Jennifer Wang, an analyst for Kelley Blue Book.

A Model S contains a lot of expensive technology. If it gets into an accident, that technology is expensive to repair and and replace, she said. (If you've ever wondered if you can afford a luxury car, we have a guide.)

The Institute for Highway Safety's Highway Loss Data Institute came to a similar conclusion in a June report. HLDI said the Model S has higher claim frequencies and costs more to repair than comparable gas-powered luxury cars, which prompted insurer AAA to announce it would raise rates on Tesla vehicles.

A Tesla spokesperson did not respond on the record to a request for comment from Policygenius, but shared a company statement from June regarding the AAA rate hike. In the statement, a Tesla spokesperson said it was working with insurers to lower premiums and that Tesla features like Autopilot, which helps drivers steer, park and change lanes, helped reduce accident rates.

Despite the difference in insurance costs in our comparison, the five-year cost of owning a Model S is still comparable to that of the BMW, largely thanks to fuel savings.

Insurance was much more affordable for the Model 3, which is already facing production delays to meet demand for the new car. Nearly 400,000 people put down $1,000 deposits on the $35,000 car this year, but Tesla has only built 260, Bloomberg reported.

The Model 3 is not as affordable as a Honda Accord, but no one is putting down a $1,000 deposit to reserve a Honda. Still, the Model 3 puts Tesla within reach for more people, both in long-term and up-front costs.

Get financial news & advice sent straight to your inbox each week. Sign up for the Easy Money newsletter here.