How ethical is your bank?

Updated March 11, 2019: When choosing which bank to deposit your money with, a number of questions come to mind. What are their policies? Where are their locations?

But beyond the usual logistical stuff, there’s that nagging question in the back of your head: Just what do these banks do with your money while they’re keeping it safe in an account? After all, when you choose to put your dollars into an account with a bank, it gives them the opportunity to use it to fund whatever they wish until you withdraw it. It’s up to you to decide whether or not you would like your money to go toward the issues that the banks invest in.

The question of bank funding reached the mainstream recently with the Dakota Access Pipeline controversy, as activists asked customers to divest from the banks that backed the project. Some of the most popular chains on the list included Bank of America, Wells Fargo, Chase, Citibank and ING Bank. The activists’ thinking was that individuals could pressure the banks into withdrawing their investment, thus resulting in the demise of the pipeline.

Banks can be reckless

If you’re old enough to remember the fall of 2008, you probably can recall with great detail the market crash that altered the world economy and led to shockwaves of unemployment and hardship across the country and internationally. What you probably don’t remember is who actually caused that crash. (Learn what jobs will survive the next recession.)

The banks responsible for the crash, for the most part, are still alive and well today, though some operate under different names than before. Some of the biggest financial institutions of the time were giving customers faulty home loans, resulting in the collapse of the mortgage market when they failed.

It doesn’t take a controversial pipeline on Native American land to get the banks to use your money in ways that you might oppose. The major commercial banks in the United States have donated more and more money to political candidates as years have gone by. They now financially back people and issues that may make you queasy, regardless of which side you support. The big commercial banks donated $40,730,096 to political candidates in the 2016 election cycle, skewing considerably toward Republicans with 69% of their money going toward the GOP.

The biggest donors include Bank of America, which gave more than $3 million to politicians, with 68.1% going toward the Republican party. JPMorgan Chase & Co., the second biggest contributor among the main banks, contributed 48.3% of their $2.9 million in political donations to the GOP.

Here is the breakdown of banks’ contributions to federal politicians during the 2016 election cycle: 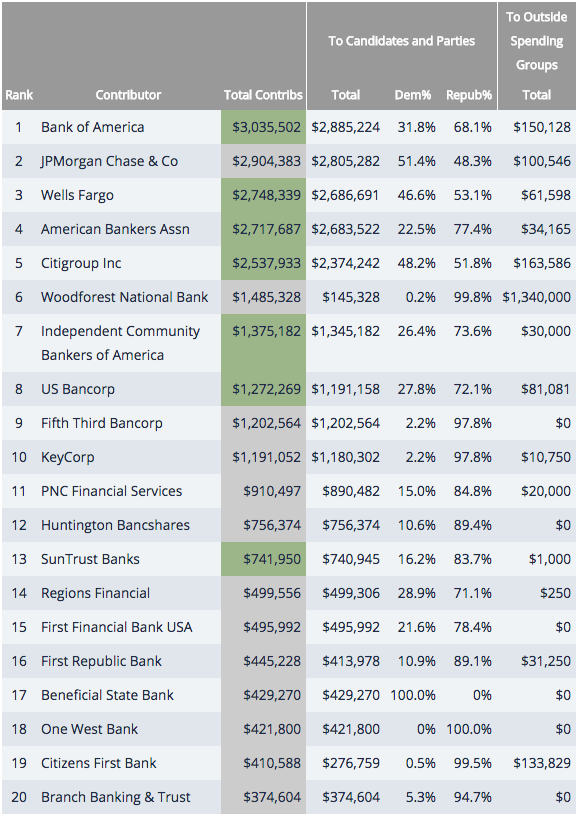 Are there any ethical banking options?

Not all political involvement is inherently bad. But if you oppose corporate banks donating to politicians, there are options.

Small local banks, by their very nature, will never be on the list of big donors to political elections because they are too small to join the fray. If you’re looking at a credit union, however, the federally backed ones are a part of a super PAC to influence national elections. The bank Santander is notably absent from American politics compared to other commercial banks with locations in multiple states.

At the end of the day, the choice of which bank is right for you depends on plenty of factors, not the least of which should be the institution’s ethics. Always do your research before you trust a bank with your life’s savings.

Want more money intel? Sign up for the Policygenius newsletter.