Financial lessons from my parents, grandparents, and the shtetl

I’ve read a lot of articles in the last few weeks about the lessons we teach our children about money. I’ve also cracked open a book on the subject–Ron Lieber’s excellent The Opposite of Spoiled. It’s made we wonder–how much do we really learn about money from our parents? And what did they learn from their parents, and their parents’ parents? And, like our noses and eyes, did those financial lessons get passed down from generation to generation?I don’t remember my parents ever sitting me down to explain money. I remember learning the value of coins and counting the pennies in the giant change jar in our living room. I remember vaguely understanding the concept of retirement when we visited my aunt and uncle in Florida.

But just because I don’t remember specific lessons doesn’t mean my parents didn’t teach me anything about money. Though my parents aren’t materially wealthy, money was always there for me when I needed it. And not just in a, "well, there was a roof over my head and food in the cabinets" version of need, either. Money was the key to my desire to be creative, whether that came in the form of arts summer camps or musical instruments that I failed to learn (piano and guitar).To that end, I have no qualms spending sometimes ridiculous amounts of money on tools that facilitate creative endeavours. My parents’ endorsement of creativity led me to prioritize it in my personal and financial lives, going so far as to accrue thousands of dollars in student debt to get a degree in "Dramatic Writing," a major that has been difficult to both explain and defend to those with more practical priorities.

Everything else I could learn about finances–credit cards, budgets, 401(k)s–would come in time. I have the benefit of the internet; a vast library of financial resources is available to me, including those at this website. But that core value of prioritizing what you love to do, of following your heart (as cheesy as that sounds) and performing a job because you want to do it, not just because you want the paycheck, is something that’s impossible to learn from an article on the internet.

My father’s father was an entrepreneur–he owned a burlap bag factory in Buffalo, New York. It was enough to give his family a relatively comfortable life in a small American city. That doesn’t mean things were easy. When my dad was a kid, the factory burned down, and the family was thrown for a loop while my grandfather struggled to rebuild his business.Both of my dad’s parents grew up during the Great Depression. They kept a pantry in their basement with a multiple month's supply of canned goods, "just in case." In case of bad times, like the factory burning, or in case of a worldwide economic depression, or perhaps something even more sinister, like the constant threat of nuclear war. At school, teachers told my father and his classmates that they would be protected from a falling bomb if they hid under their desks. A pantry must’ve seemed like a safe bet in the face of nuclear war.My grandfather was very attached to his business. It "dominated his life," according to my father, "and gave him a mechanism for avoiding his emotions." Very few people wake up in the morning excited about the world of burlap bags, but for my grandfather, it was his livelihood. It was what allowed him to raise himself and his family up to the middle-class. And he desperately wanted my father to go into business with him.

My grandmother, on the other hand, encouraged my father to follow his passions and do work that was important to him and would make him happy. This, ultimately, was the path my father chose. In the short-term, he damaged his relationship with his father, who, though he could not express it to his son, saw it as a personal rejection. The business was his life and my father rejected the business–it’s not hard to perform some pop psychology on that.In the long-term, however, it allowed my father the opportunity to grow as a human being, to meet the woman who would become my mother, and to teach his own children the lesson of prioritizing your passion. His father would eventually come to terms with this and, by the end of his life, was openly proud of his son’s accomplishments.

My parents taught me to prioritize work that I cared about and to follow my passions. My father’s mother taught him the same.It’s impossible for me to know where my grandmother came up with this idea.All of my great-grandparents on my father’s side were immigrants from somewhere in Poland or Russia. When I try to imagine them or their lives, all I can think about is An American Tail. I know so little about them, and their experience is so distant from my own, that it’s impossible for me to understand or even think about them on any sort of personal level. 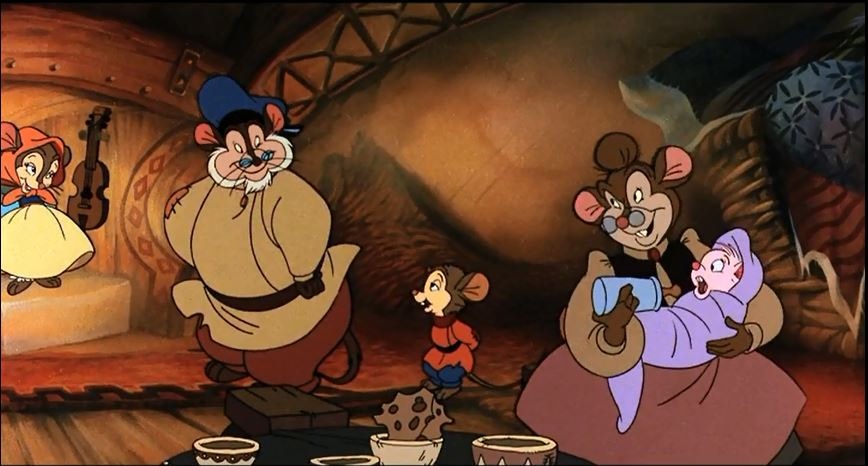 Before coming to America, my ancestors lived in shtetls–another word for the small Jewish communities that littered Poland and other eastern European countries (the borders of which have all changed since then, anyway). You’ve probably seen a shtetl if you’ve ever seen Fiddler on the Roof or read Everything is Illuminated.These communities were close-knit and exclusively contained Orthodox Jews. The only time the Jews interacted with goyim, the Yiddish word for non-Jews, were on market days. The community valued education–even the poorest Jews worked in skilled trades, such as shoemaking or as a tailor–and charity above all else.I have no idea if this culture stayed intact when my great-grandparents hopped on a boat and came to Ellis Island. I have no way of knowing the extent of its influence on my grandparents or my father.I could make something up about how I believe that the virtues of education and charity were passed down through generations, despite the radical change in environment from Poland to America. But I don’t believe that. I think it’s much simpler: my grandmother, who grew up in the Depression to immigrant parents and moved up to a comfortable middle-class life, had experienced the American Dream firsthand. She truly believed that in this country, you could do anything you wanted to.That, and she loved my dad, and wanted him to be happy (and what makes you happier in America than following the American Dream?). That love, more than any financial lesson, is what was passed from generation to generation.As far as learning a financial lesson from those old shtetls–you could do worse than teaching your kids that education and charity are the highest virtues.https://www.youtube.com/watch?v=RBHZFYpQ6nc