Family leave in 2016: Candidate stances on policies for parents

Aviva Rosman is the COO of BallotReady, the award-winning nonpartisan voter guide to every race and referendum on the ballot. BallotReady has a database of over 20,000 candidates with content on candidates’ biography, endorsements, and stance on issues that can be used to better understand politics and policy today.

Family-focused policies have gained greater prominence in 2016 than ever before. In the national spotlight, Hillary Clinton called for paid family leave on Mother’s Day. Ivanka Trump introduced her father at the RNC with a speech emphasizing equal pay and motherhood.

Progress is also being made outside of the glare of the presidential election. Three states -- California, Rhode Island, and New Jersey -- already have mandated paid leave. States with Republican governors like Texas and Maryland have passed equal pay laws. In Congress, New York Senator Kirsten Gillibrand and Connecticut Rep. Rosa DeLauro have proposed the FAMILY Act, the first ever bill to provide up to 12 weeks of paid family and medical leave.So family friendly policies are slowly becoming a greater part of our political discussion. But what’s happening in individual races across the country this election? How do the candidates running for the House and Senate stack up on the issues of equal pay, family leave, and affordable childcare?

Candidates for U.S. House and Senate in 35 states took stances in support of policies for families. BallotReady analyzed data from the over 1,000 candidates running for federal office to create a snapshot of what candidates are saying about affordable child care, paid leave, and equal pay across all 50 states. Here’s what we found: 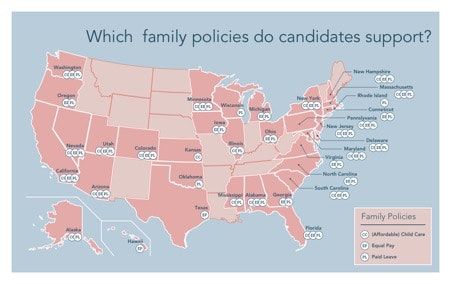 The most popular issue was equal pay, with 7.8% of candidates supporting equal pay for women, followed by 6.9% supporting paid leave, and 3.3% taking a stance in support of affordable child care overall. Female candidates were more likely to take a stance on all three policies. 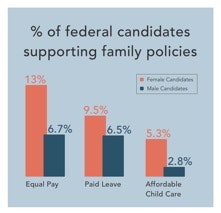 However, across the board, we found that discussion of family policies was far less prevalent than positions on healthcare, education, or the economy.

Nuance in the Senate

In a few states, however, issues related to family policy have been a key part of the fall campaign, in some cases even affecting the balance of the Senate.In New Hampshire’s national-attention-drawing Senate race, Governor Maggie Hassan has repeatedly attacked incumbent Senator Kelly Ayotte for failing to fight for equal pay. While in Congress, Ayotte voted against the federal Paycheck Fairness Act four times (although most of them were procedural). Though Ayotte did introduce her own equal-pay bill, called the GAP Act, many on the left criticized the legislation for leaving loopholes that favored employers, like preventing women from sharing salary information.Earlier this year in Maryland, Republican Governor Larry Hogan signed one of the most expansive equal-pay laws in the country into effect. It is perhaps not surprising then that a significant number of Marylanders running for Congress have voiced their support for initiatives like paid family leave.

In the Maryland Senate race, Democratic Representative Chris Van Hollen has staked out a number of positions on family-related issues: universal pre-K, supporting the Paycheck Fairness Act, and increased tax credits for childcare. His opponent, House of Delegates Minority Whip Kathy Szeliga, has stated she wants companies to provide men and women with more flexibility so they can be good parents. Additionally, while Szeliga voted for Maryland’s expanded equal pay act, she has voiced doubts against additional federal legislation on the issue.As the prominence of family policy has risen this election, the differences between candidates in high-level races has become narrower. For those talking about it, there seems to be a consensus that better policies can help strengthen families and our country. However, advocates will need to continue to push their legislators to keep this issue at the forefront. The next set of questions is not merely about supporting paid family leave or equal pay, but about childcare tax credits vs early education grants and comprehensive federal legislation vs closing loopholes. Make sure to check out BallotReady so you can vote informed on all the family policy issues on your ballot this fall!