Don't get caught in the rain: Dark Sky, Poncho & Siri to the rescue We had a freak hail storm in New York just a few days ago. While cowering underneath an awning with some fellow citizens, I overheard one of them say, "Only in New York!" with a sort of resigned shrug.First of all, other places definitely have hail storms.Second, you do not have to resign yourself to this fate.Underneath the awning, I quickly pulled up an app called Dark Sky on my iPhone. Dark Sky is an awesome weather app. I downloaded it years ago when it first came out and I have got way more than my money’s worth out of it. I’ve tried other third-party weather apps– Weather Line is a particularly pretty alternative–but I always end up going back to Dark Sky.Dark Sky provides eerily accurate precipitation predictions–which is to say, it’s really good at telling me when it’s going to rain. More important in the above situation, Dark Sky is really good at telling me when it’s going to stop raining. In this case, the ridiculously heavy rain was set to stop in six minutes. 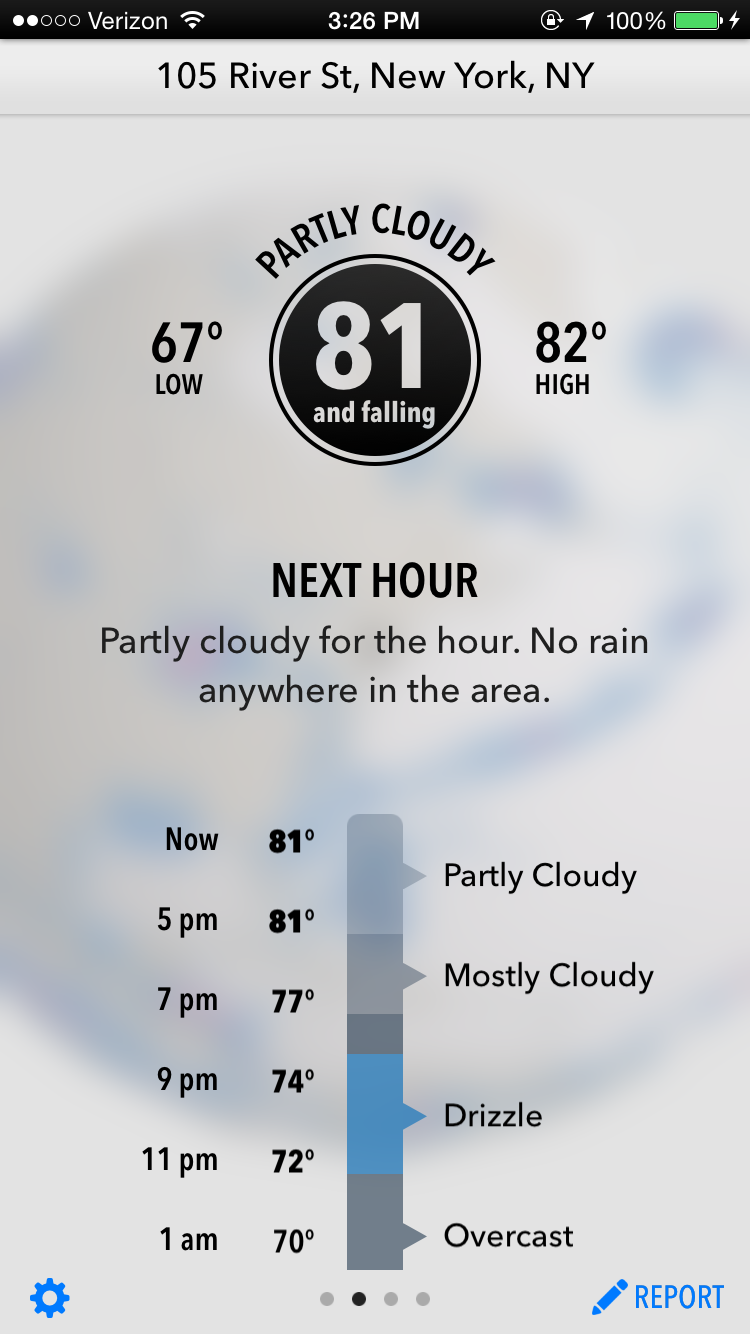 But Dark Sky’s best feature doesn’t require you to open the app at all. When it’s about to rain–or drizzle, or snow, or sleet, or hail–Dark Sky will send you a notification. It’s a super simple notification: "Heavy rain starting in 10 minutes," for example. Or this one that I literally just received: 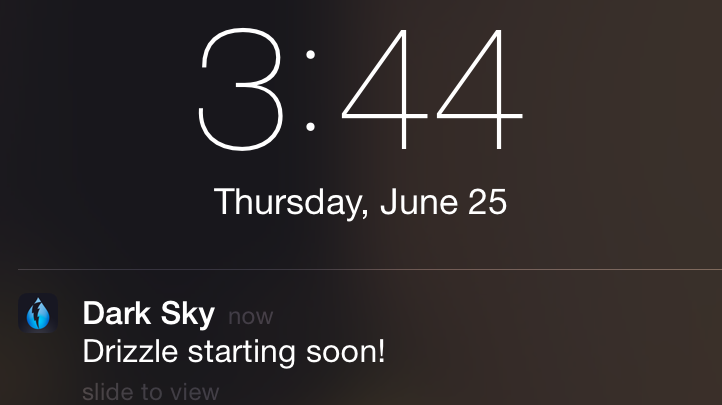 This is a notification for rain, not a Drake concert.

If you’re about to head out of the house or work, this is a super useful feature. In New York, where pretty much every travel plan involves some sort of walking, being prepared for rain is important. Nothing ruins your day quite like getting soaked while rushing to the subway.Like I said before, I’ve been using Dark Sky for years. I used to run into a problem with it, however. While it was useful to know that it was about to rain, I would often be out and about without a rain jacket or umbrella. Rain storms can often interrupt otherwise perfectly sunny days.That’s why, last fall, I was excited to hear about a new service called Poncho. Poncho is a weather notification service, but instead of installing an app, Poncho will send you the weather through a text message or email.But Poncho does more than just send you the weather. Poncho sends you personality. 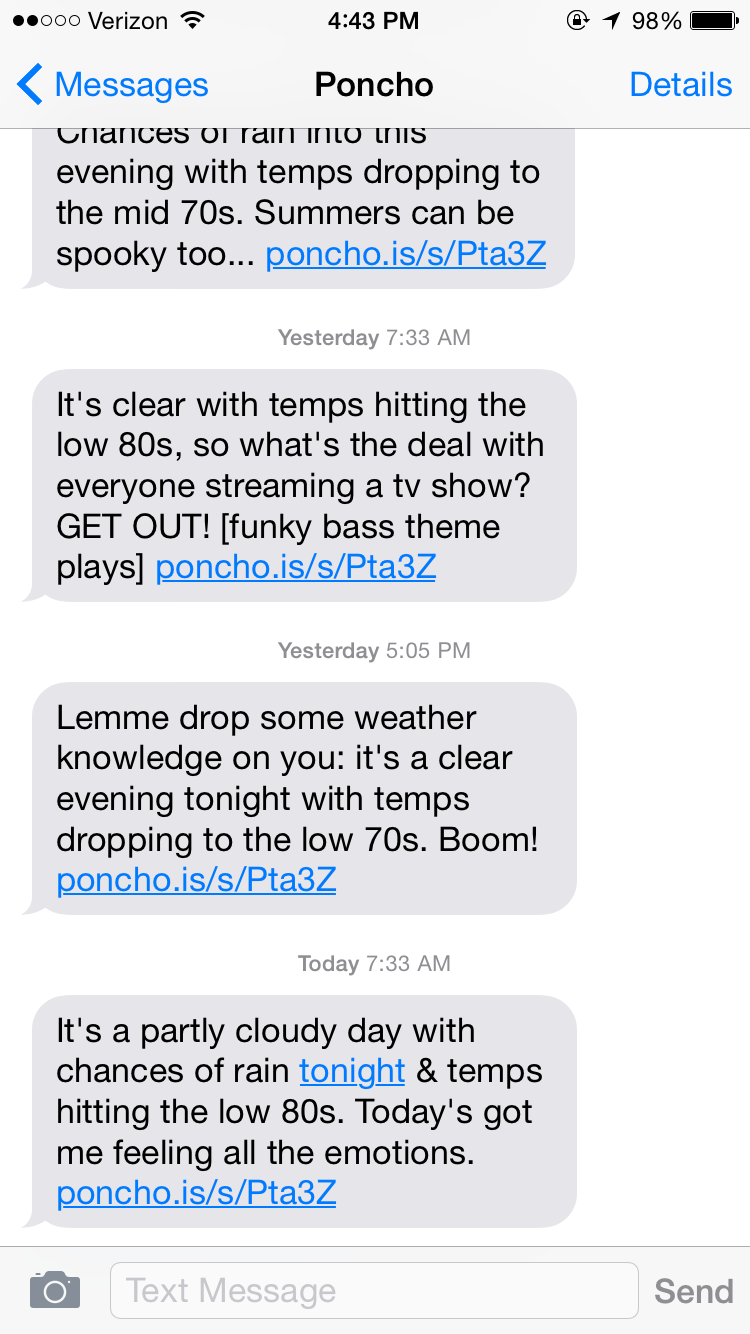 Click through the links at the end of every text and you’ll see a webpage with an awesome, thematic GIF (or sign up to the emails and get the GIFs sent directly to you).

Poncho is represented by an orange cat wearing a poncho, who is presumably named Poncho and is sending you these texts and also tweeting from their multiple accounts. 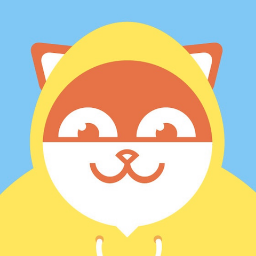 I love Poncho’s morning notification for two main reasons: 1) it tells me if I need to pack an umbrella and 2) I actually want to read it every morning. Before Poncho, I was always forgetting to check the weather and plan ahead. I don’t listen to the radio or watch the morning news, so it wasn’t shoved in my face like it might be for my parents. Poncho basically replaces Al Roker for me.There is a ton of extra info you can have Poncho send you as well. I have Poncho set up to send me pollen warnings and subway issues. Poncho will also let you know if your hair is going to get messed up from the humidity and send you alternate side parking info. You can also have Poncho send you warnings based on whether or not you have outside pets.

Poncho is currently available in New York, Boston, Newark, Hartford, New Haven, Providence, Syracuse, Albany, Chicago, Austin, Dallas, and Houston. They’re constantly adding new cities, so if they’re not in your city yet, sign up to their mailing list to get notified of their imminent arrival.Dark Sky has recently expanded their notification offerings, threatening Poncho’s place in my life. With the latest version of Dark Sky, you can get a morning weather update like Poncho’s. Except, well… it’s not nearly as fun. 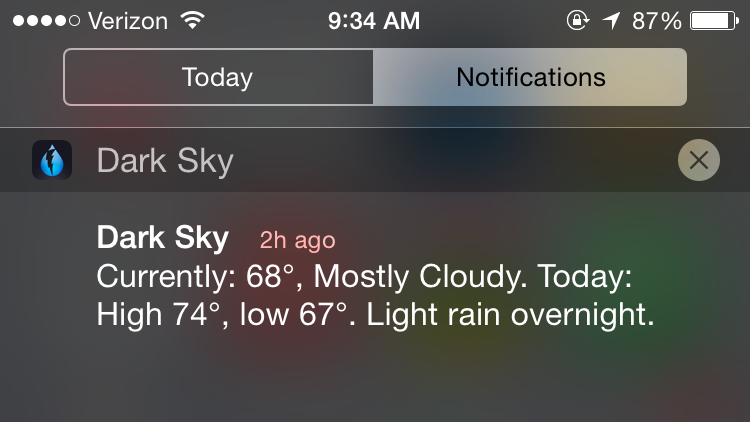 Snoozeville!While Dark Sky’s morning updates are useful notifications, I can’t see myself switching away from Poncho’s texts any time soon. Poncho is just too entertaining to give up for the time being.But Dark Sky has also added a feature called Custom Alerts. With Custom Alerts, you can have Dark Sky notify you of the status of almost any weather condition for the next 24 hours. 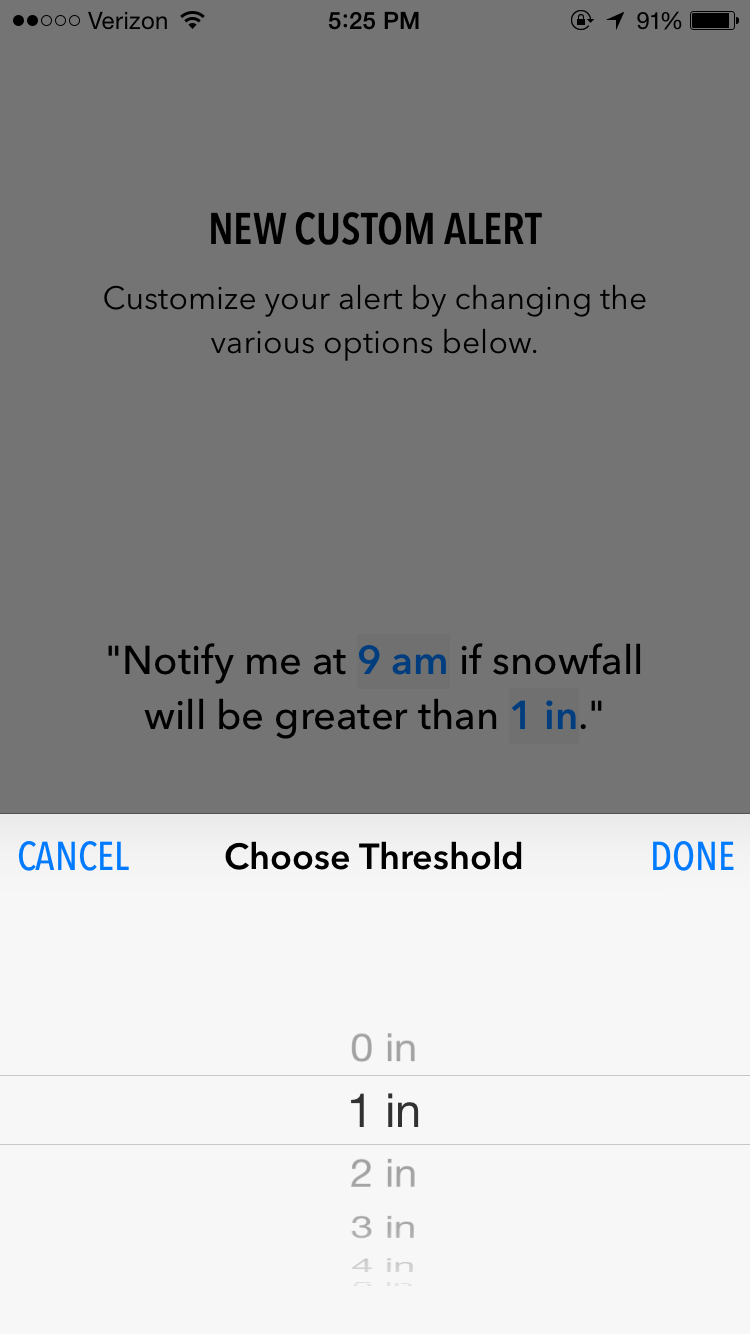 Currently, you can set custom alerts for temperature, feels-like temperature, precipitation probability, snowfall, wind speed, UV index, and humidity. You can set a time you want to receive the alert and an alert threshold. For example, I have an alert set up for 9 am to let me know if the feels-like temperature will rise above 75 degrees that day. Again, this replaces a radio announcer or TV weatherman–and is customizable so that I can receive it whenever I want.Dark Sky and Poncho pretty much cover all of my weather needs–notifications or otherwise (behind all of that notification stuff, Dark Sky is a beautiful weather app with some pretty amazing radar maps). But there is one edge case where I don’t want to use either of them: when I just don’t want (or can’t) interact with my phone.Here’s the situation: I’m lying in bed. I don’t want to open my eyes, let alone try to comprehend words on a screen. My iPhone has "Hey Siri" turned on, which means I can talk to Siri without touching the phone as long as it’s plugged in. I groggily mutter, "Hey, Siri, do I need an umbrella today?" My phone thinks for a bit. Then Siri says, "No, I don’t think you’ll need an umbrella today."Siri’s not perfect, but for the most part, she understands natural language questions like this. And when I don’t want to deal with a ton of data and words in my face, Siri is a welcome (robotic) voice.