Why it's better than ever to lease a car

For years, the common wisdom that leasing a car was a losing proposal. Sure, you pay less per month than getting an auto loan, but at the end of your lease, you’re either stuck with paying off the rest of the car’s value or with no car at all.But recently, the tides have started to change on two fronts. For starters, new cars are packed with more technology than ever before. As Marc Frons put it for the New York Times, "Cars now seem like gadgets that you can upgrade every couple of years." In fact, you have to get one of the latest cars to take advantage of new, phone connected dashboards or the latest autonomous driving features.Additionally, it’s now easier than ever to use the internet to find great deals on a new lease or sell your lease to a prospective buyer. Together, these two factors make now the best time to start leasing a new vehicle. With the future of transportation being what it is, and the rate at which carmakers are introducing new features, it now makes sense for almost everybody to lease their next vehicle instead of buying outright.

If this is your first experience with leasing, it will help to understand the basics of how auto leasing works. When you lease a car, you’re paying for the amount of depreciation that occurs while you use it. To put it another way: You take out a two-year lease on a car that costs $35,000. The car has an estimated value of $28,000 at the end of those two years, which means it depreciated in value by $7,000. Divide that $7,000 by twenty-four monthly payments and you have your base payment of approximately $292 per month. There are other charges, plus taxes, but that is essentially how your lease payment is calculated.When you lease a car, you still technically own the car — you get a title and everything! This means that at any point before your lease is up, you can (usually) sell the car and the lease to someone else. If your car’s value doesn’t depreciate as fast as the manufacturer estimated when it leased it to you, it’s considered to have "equity." If your leased car has equity, you may be able to use that as a down-payment on your next leased car when you return the car to the dealer.You may also be able to sell your leased car before the lease is up and pocket the difference. In this situation, you basically need to find someone, either a person or a company, who is willing to assume your lease. The idea is that they’re going to pay full value for the used, leased car when the lease is over — part of that will go to the dealership, to pay the agreed-upon estimated value that you set when you signed the lease, and the other part will go to you. You’re basically pocketing the difference what you agreed the car would be worth and what it’s actually worth.Some example of websites that may help you sell your lease include SwapALease, LeaseTrader, and CarMax. If you’re interesting in buying someone else’s lease, you can use those same sites to search and shop for unfinished leases.Most people, however, end up returning their car to the dealership, where they apply any available equity and get a new lease if they want. For the majority of customers, this is the easiest way to end your lease.

How to get a good deal on your lease

There are two big blogs where you can find great deals on new leases: Leasehackr and Edmunds. You’ve probably heard of the latter — it started as an actual magazine way back in the sixties. But we’re going to tackle Leasehackr first, mostly because it’s solely focused on lease deals.Leasehackr evaluates leases based on the manufacturer's lease program, which establishes the following three numbers:

When Leasehackr finds a deal, they throw all of these numbers into their calculator and come up with a Leasehackr score, expressed in "the number of years it would take for the accumulated monthly payments to exceed the MSRP ." The higher this score, the better the lease. 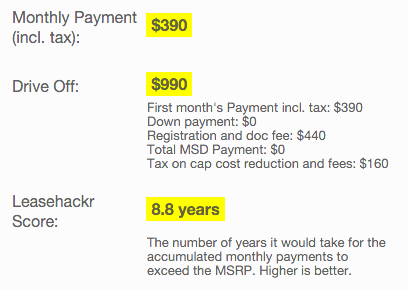 You can also input your own numbers into the calculator to get a personalized Leasehackr score. Plus, Leasehackr will also help you figure out exactly how much you’ll have paid by the end of your lease.Some Leasehackr deals are pretty modest — approximately $300 per month for some of their latest deals, for example — but other deals are absolutely incredible, especially if you already own a car from the same manufacturer. One deal this month can get you a Chevy Malibu for $54 per month if you already own or lease a Volt. Another deal from December got recent college graduates a $132 lease on a Ford Fusion.Edmunds also writes up a monthly list of $199 per month (and less) car lease deals. They use the same page for all of their monthly lists, so bookmark that page and come back to it every month to see their latest deals.If you play your cards right, you’ll end up paying way less over time to always have a new-ish car. For more tips on how to maintain your leased or owned car, check out our article on how to slow down the depreciation of your car’s value.