Best states to start your career and achieve happiness

We’re all excited when we graduate college. It’s a grueling (and often expensive) journey that’s extremely satisfying once you strike out on your own.It’s not uncommon to see people head off to the bright lights of a big state like California, New York, or Texas. But just because those states are the most alluring, does that mean they’re the best for new graduates?Turns out, not necessarily. The best places for a young person to get their career and finances off to a great start isn’t where you think. 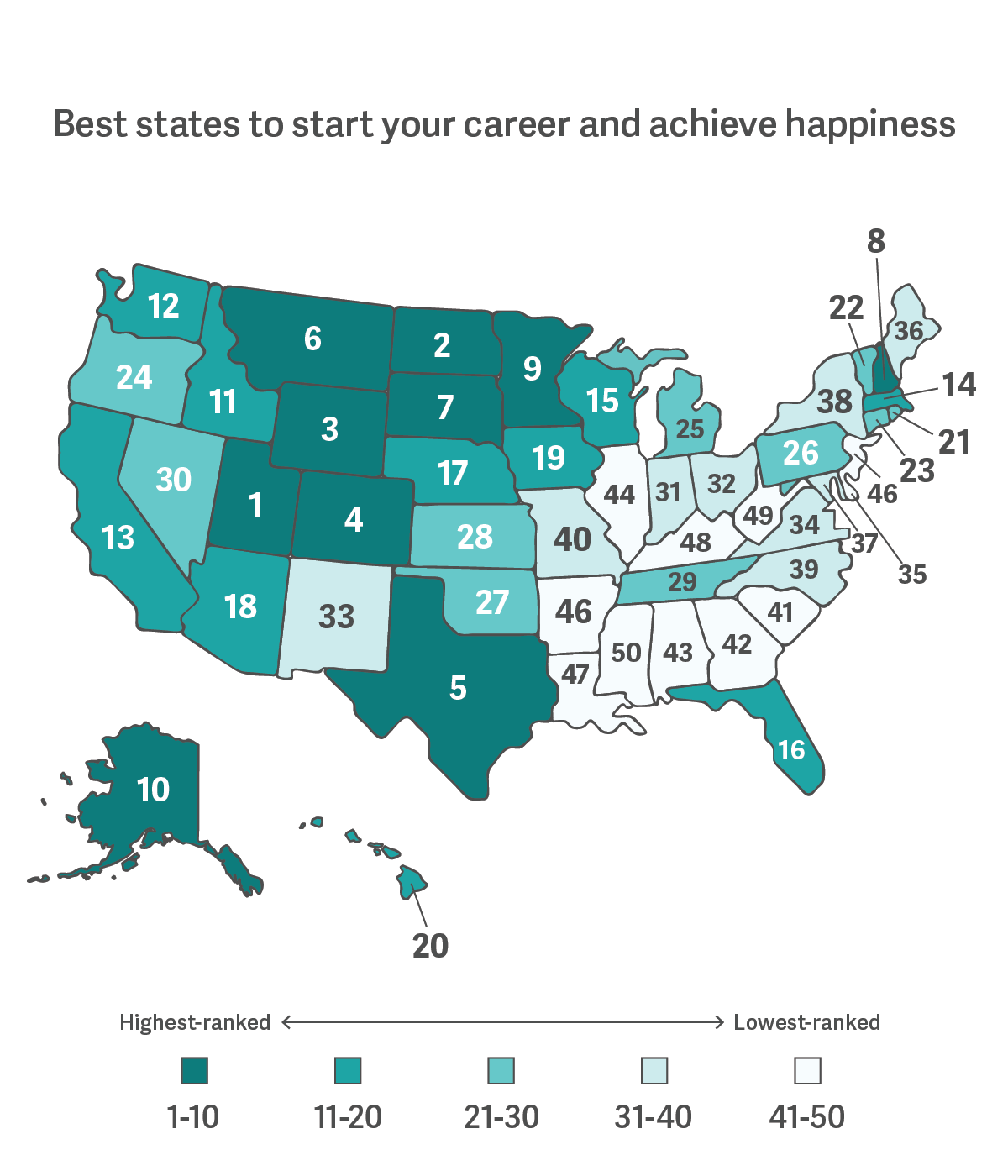 What makes a great career-starting state

So what makes a good state to start your career after graduation? We looked at a few factors that should go into which state a Millennial decides to start his or her career, including the state’s:

We ranked each state out of 50 in each category, with 1 being the best and 50 being the worst, and averaged the results. As a tiebreaker, we gave the edge to the state with the higher early career starting salary.

Unemployment rate for workers under 25

During the recession just a few years ago, young people were graduating into a job market that simply wasn’t there; the national unemployment rate for workers under 25 peaked at 19.5% in April 2010 (compared to a peak of around 10% for the country as a whole). We looked specifically at the unemployment rate for workers under 25 years old to get a better idea at where young graduates should go to increase their odds of getting work as soon as possible. Our unemployment numbers are courtesy of the Economic Policy Institute, using monthly Current Population Survey microdata from the Bureau of Labor Statistics.

There are two main things that go into how much money you have leftover for discretionary spending: how much money you’re making and the cost of living wherever you are. It’s important to take both of these into account; New York, for example, has a pretty high average starting salary at $46,464 but the high cost of living – $27,255 – can quickly wipe out those gains. That’s how it ends up at #48 in this category.

The average starting salary was pulled from Payscale’s survey data, which polled people who received bachelor’s degrees from four-year colleges. It’s "early-career" salary, which includes the first five years after graduation and provides a pretty good insight into what students will be earning soon after they join the workforce.The cost of living was calculated using the expenses for one adult in MIT’s living wage calculator. The expenses include food, child care (which is 0 for our purposes), medical – including insurance premiums and health care costs – housing, transportation, taxes, and "other," composed of "major budget components such as clothing, personal care items, and housekeeping supplies" based on data from the Bureau of Labor Statistics Consumer Expenditure Survey.

Economic growth data was compiled by Business Insider and pulls from a few different sources through June 2015. Using data from government agencies like the Bureau of Labor Statistics, the Bureau of Economic Analysis, the Census Bureau, and the Federal Housing Finance Agency, the fastest-growing economies rating reflects:

It also looks at Fortune 1000 companies that are headquartered in each state and the employment share of different industries to complete the picture.

If you’re thinking, "One of these things is not like the other," you’re right. While the other categories provide quantifiable measurements – the unemployment rate, for instance, can be easily measured – happiness is a qualitative category. This statistic, from a Gallup/Healthways survey of over 175,000 people "capturing how people feel about and experience their daily lives," was based on the following criteria:

Even though it’s in a different category than our other measurements, happiness is still crucial to take into account. After all, what’s the point in making good money and planning for the future if you’re miserable during the process?It’s also interesting to compare a state’s happiness with its economic and financial reality. For instance, Hawaii topped the happiness rankings at #1, and it’s not hard to see why: beautiful beaches, jungles, and volcanoes, and a seemingly carefree way of life. Their unemployment rank for people under 25 comes in at #9, which is pretty good, but surplus salary is dead last thanks to a high cost of living and its economic growth is middle of the pack at #23.

Why start your career here?

It’s not just about earning money – it’s about what you can do with it. If you choose a great state to work in, there are real, long-term consequences that can make your life easier long after you’ve graduated.