What states should first-time homebuyers start looking in?

Homeownership has long been a rite of passage in America. It’s part of the American Dream, complete with a picket fence and a puppy.Or, at least, it was.In July 2016, it was reported that homeownership rates were at their lowest since 1965 at just under 63%. This could be due to a number of factors: people being unable to afford a home, young people living with their parents for longer, or more people just wanting to forego the headache of homeownership – and the upkeep and fees that come along with it – in favor of renting.

But what about those of you who still want to reach that milestone of owning a home you can call your own? Where should you start looking?Buying a home is a big time investment. According to data compiled by Statista, 72% of houses sell for between 95% and 110% (or more) of their asking price. That means there’s not as much wiggle room for negotiation as you might think, and there’s a lot of money on the line. You don’t want to start your homebuying journey off on the wrong foot or have buyer’s remorse after closing.We dove into all 50 states, plus Washington DC, to find out where the best place was to buy your first home. Here are the factors we looked at.

How much money are you spending on your home? 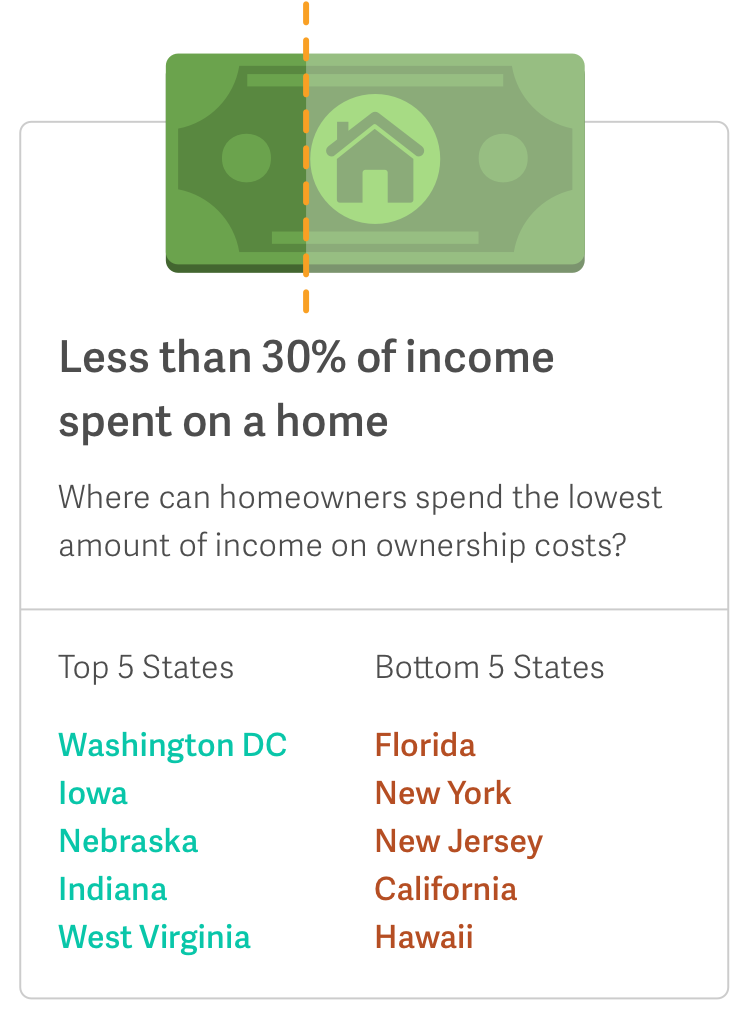 Conventional wisdom says that you should look to spend around 30% of your income, give or take, on your monthly housing payments. Whether or not that rule of thumb is actually true is up for debate, but it sets a nice benchmark to aim for. That’s why our first ranking charts how much over (or under) 30% of their monthly income homeowners are spending on housing costs.For our purposes, these numbers were pulled from the U.S. Census, and "housing costs" include "mortgages, real estate taxes, various insurances, utilities, fuels, mobile home costs, and condominium fees." In North Dakota, the average is a shocking 16.3% of monthly income spent on housing, while on the higher end – from around 35% to 39% – you have New York, New Jersey, California, and Hawaii. (We’ve talked about Hawaii’s expenses in a previous study. You really do pay for the beaches and volcanoes.)If you’re looking to buy your first home, you may not have as high an income as you expect to in the future. While you can upgrade later on in life, it doesn’t hurt to start looking in states where low ownership costs can accommodate your still-growing budget.

Is it cheaper to rent or own? 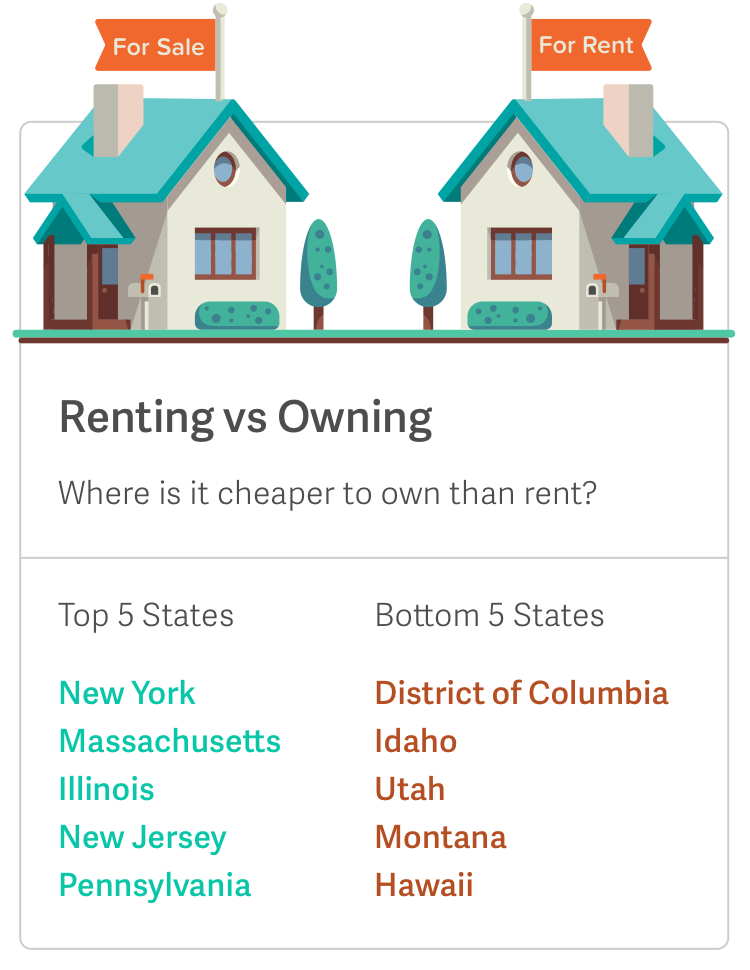 Of course, when you’re deciding whether or not to buy, the alternative is whether or not to rent. If you’re young and you’ve never owned your own place, it might be tempting to stick with what you know. But is renting an apartment always cheaper than owning a home?That’s a setup, because the answer is "no." That’s why we also ranked each state by the difference between average rent and average mortgage. The average rent is more than twice as expensive as the average mortgage in the state of New York, whereas, perhaps surprisingly, Montana mortgages are around 22% more than rent. 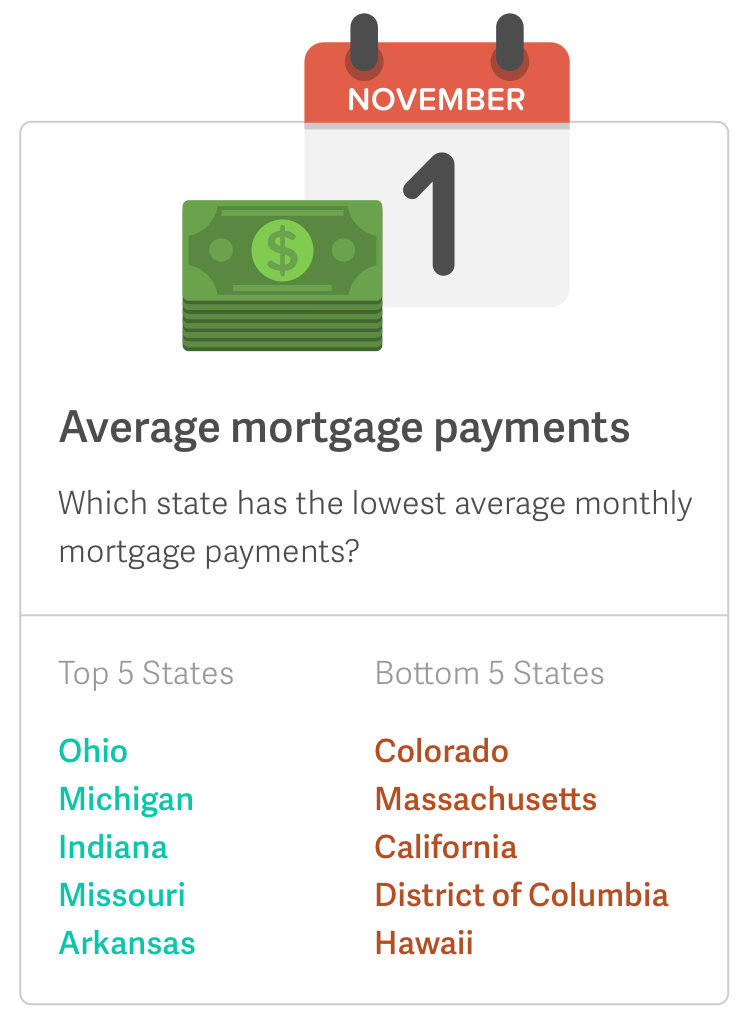 Of course, that doesn’t tell the whole story. It’s much cheaper to own than rent in New York, but that’s partially because the average rent is astronomically high thanks to a little town called New York City. That’s why, to balance this out, we also ranked each state simply by their average mortgage. In this category, New York fell to 46th place. It just goes to show that you have to consider a lot of factors when you’re looking at where to buy your first home.

How healthy is the market? 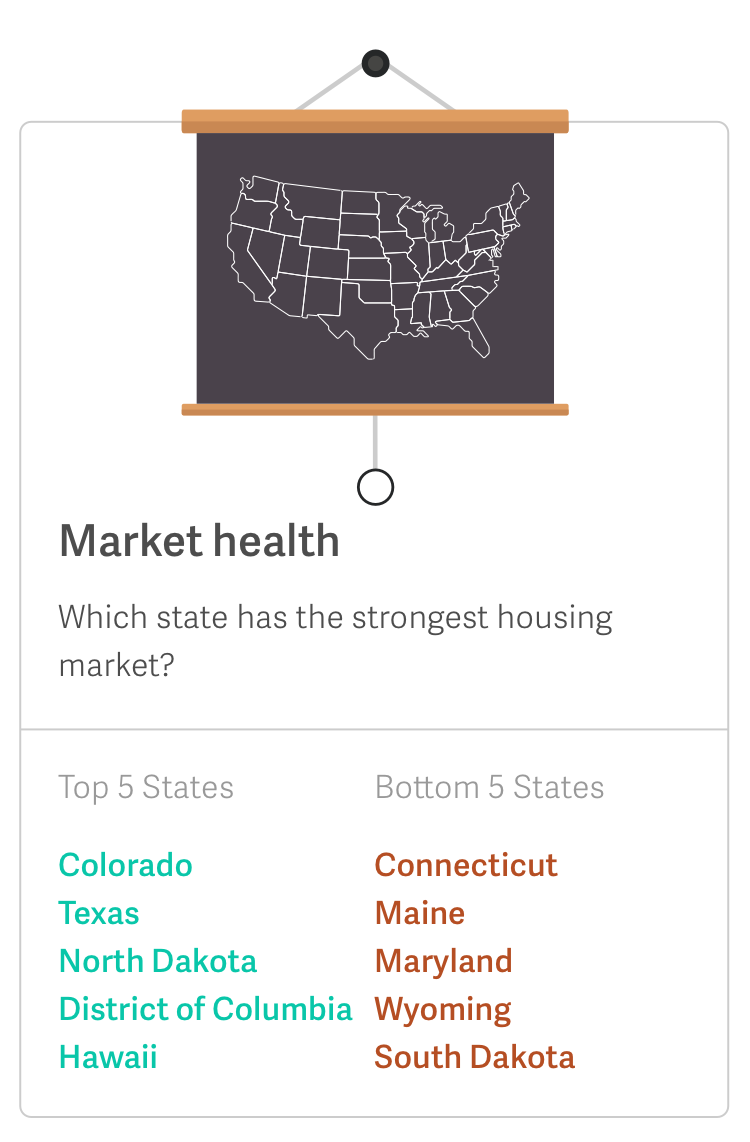 Houses are an investment, and for first-time homebuyers it’ll probably be the first big investment they make. Thanks to Zillow’s trove of housing information, we were able to grab the Market Health Index, which is "the current health of a region's housing market relative to other markets across the country...based on up to 10 metrics including those capturing the past and projected evolution of home values, the prevalence of foreclosures, foreclosure re-sales, negative equity and delinquency, as well as whether homes are currently selling faster or slower than in the past."Essentially the index is a measure of how healthy the market has been, how healthy is it now, and how healthy is its projected growth.

Homes are a long-term investment, so the last thing you want is for your house to be worth less five years from now than it was when you bought it. Not only does that hurt financially, but if you want to get out from the sinking investment, you need to uproot your entire family. Choosing the right place to buy your first home saves you a lot of hassle in the long run.One small caveat for this category: Zillow didn’t have Market Health Index data available for every state. For Louisiana and Nebraska, we used the Market Health Index values for New Orleans and Lincoln, respectively; for South Dakota and Wyoming, where the Market Health Index was unavailable for any states, we ranked them based on their Zillow Home Value Index, another measurement the site uses to estimate the value and health of markets. 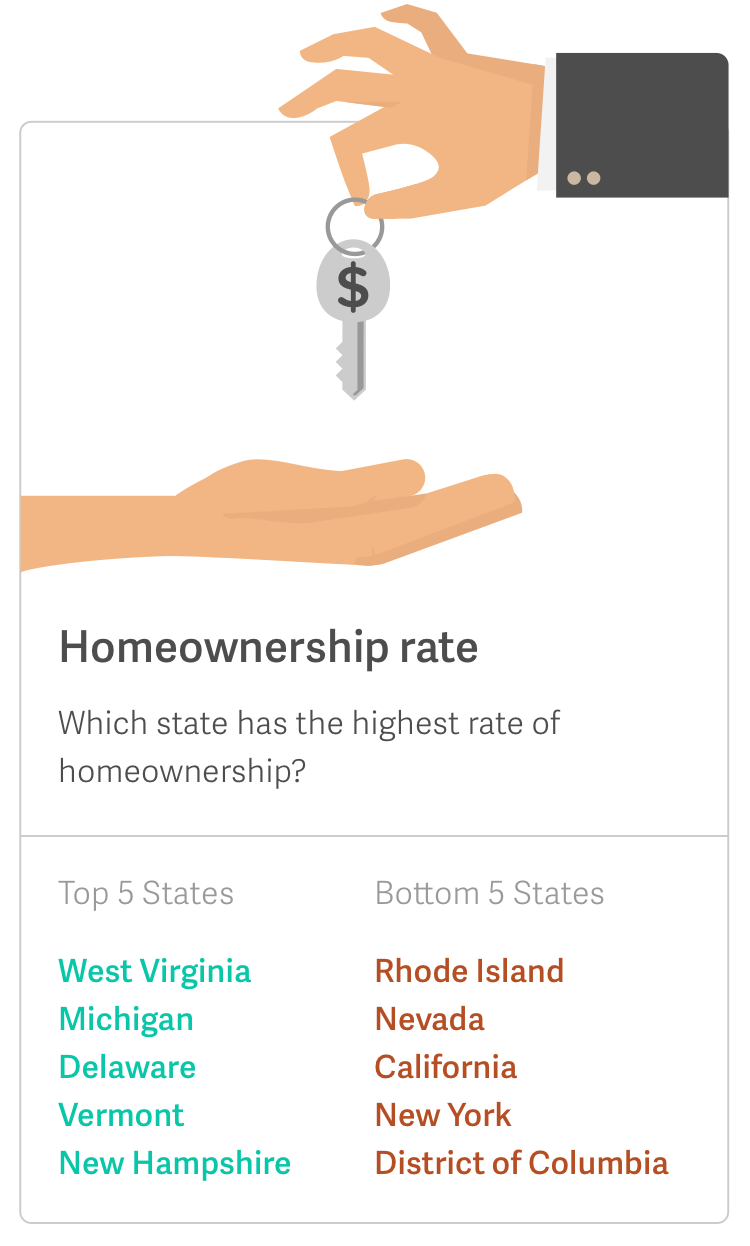 As a complementary statistic to the health of the housing market in each state, we also looked at homeownership rates. We gave a higher ranking to the states with the higher homeownership rate.Why? It comes back to housing being an investment. In states with a high amount of renters, you may have a hard time finding a supply of available housing to own – and when it comes time to sell down the line, you might not have a supply of ready buyers. If you buy your first home in a state with a high ownership rate, you have a better chance of success both at the beginning and end of your journey.

What’s the price per square foot? 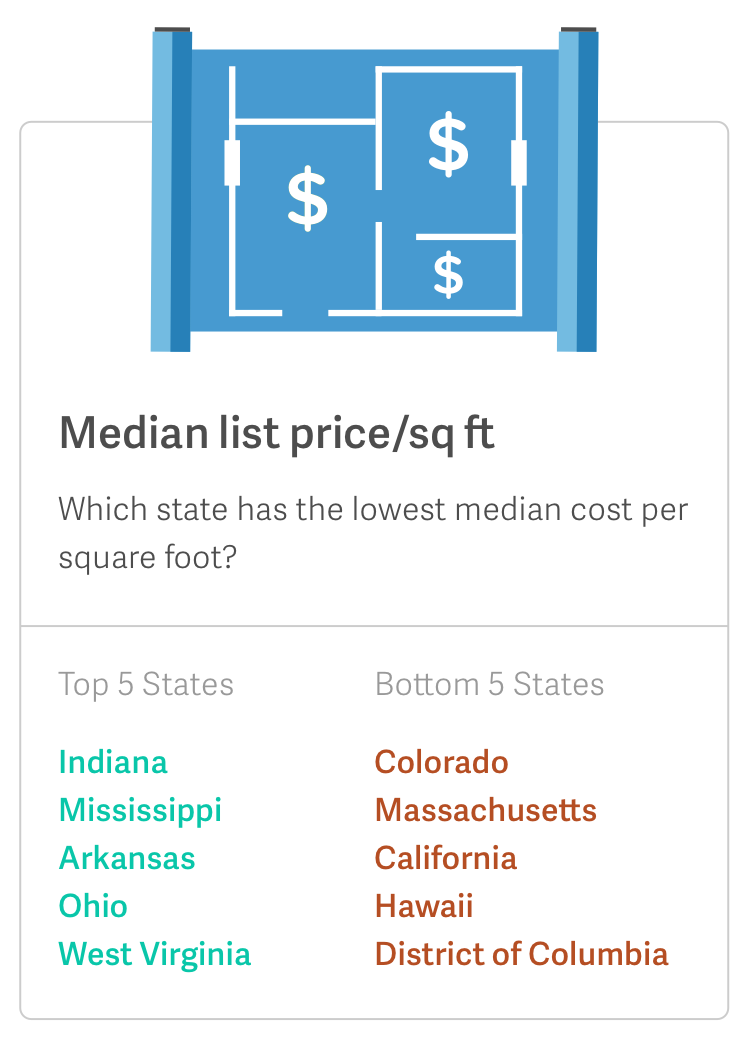 Now we’re getting into the nitty gritty of homeownership: square footage!It’s tempting to buy the biggest, grandest house you can. After all, who doesn’t want a spiral staircase and three floors and rooms that you don’t even use? But that’s not always available to you with that pesky budget. Especially when you’re buying your first home – aka a starter home – you might have to settle for something smaller...unless you’re looking in the right place.Nine states – Indiana, Mississippi, Arkansas, Ohio, Alabama, West Virginia, Oklahoma, Georgia, and Kansas – all have median list prices per square foot under $100. Compare that to Hawaii and Washington DC, at $458 and $493, respectively – around $200 more than California, coming in 48th at $286 per square foot.Depending on how you want to compromise based on other costs and other factors entirely (like happiness, which we’ll get to next), you may be able to get a bigger house than you thought you could afford.

How happy will you be? 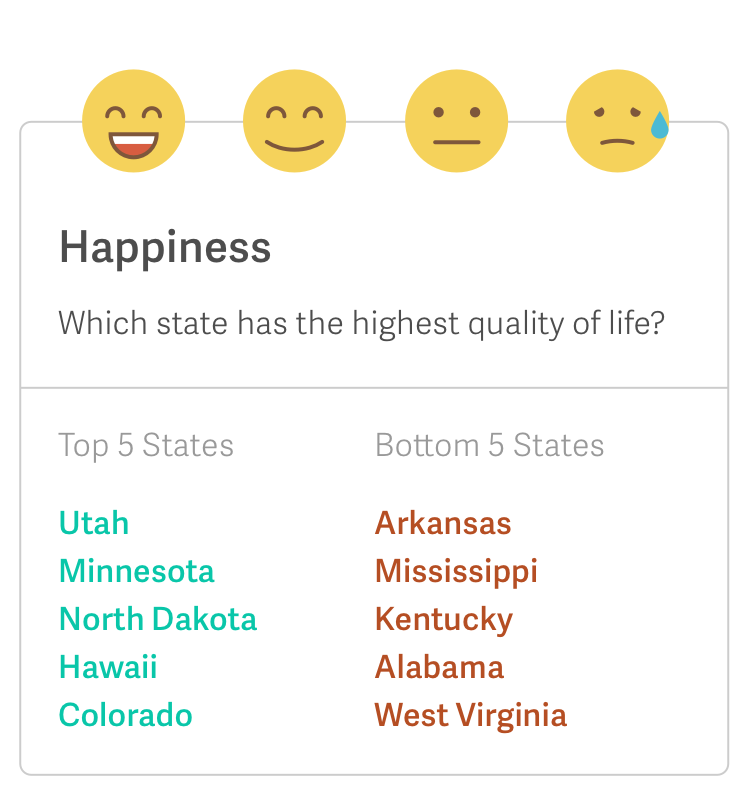 Obviously this one is just a little subjective. Still, we used the results of WalletHub’s survey of the happiest states, based on emotional and physical well-being, work environment, and community and environment (each of which has their own individual components, like adequate sleep, sports participation, and income growth). Your mileage may vary, but seeing how happy your peers are is a good place to start when it comes to judging your own happiness.Utah comes in first overall, ranking in the top four in all three of the above categories. Hawaii is fourth (its work environment rank of 20 drops it pretty far), and Southern states take up the bottom seven slots.

You want your home to be where you lay down roots. That means it isn’t solely about the financial implications. Ranking states based on their average happiness – however hard that can be to judge – can help you feel confident that you’re making the right choice in where you buy your first home, that it’s more than just an investment.They say that home is where the heart is – and that’s a sentiment which can put a lot of pressure on first-time homebuyers worried about making a misstep in their shopping journey. If you’re undecided about where to start, take a look at the best places and where they rank based on your priorities.It might just help nudge you toward where you should be.