You know your product is going to have a rough time in the press when it’s initially mistaken for an April Fool’s joke. And yet, here we are, many months after Amazon first announced Dash Buttons, IRL buttons that let you order things from Amazon. But you can’t order just anything — each button corresponds to a particular brand and is emblazoned with their logo. Since each button is connected to your WiFi network, they’ll shoot messages to your phone every once in a while to remind you to press them, encourage you to consume, and just say hi. (That last sentence isn’t true — I’m just working on a pitch for the next season of Black Mirror.) 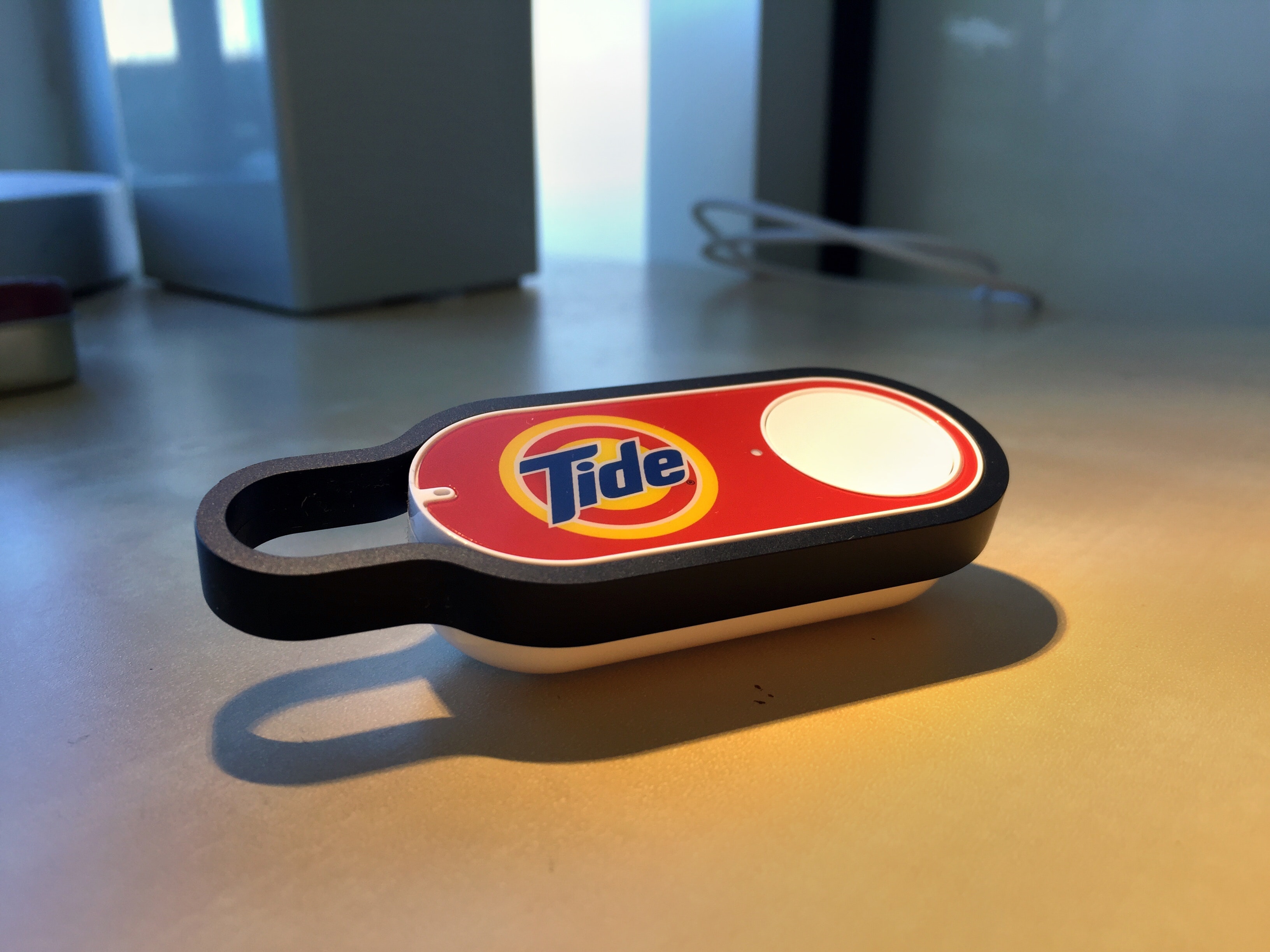 Amazon announced earlier this month that they were adding eleven additional brands to their Dash Buttons program, plus they were effectively making Dash Buttons free (they cost $4.99, but Amazon will give you a $4.99 credit on your first purchase from the Dash Button). Obviously, I ordered one. This is my story.

The decision to purchase a Dash Button is not one that you can make lightly. You’re not just buying a plastic dongle that will stick to your wall or your cupboard. You’re buying a small, plastic billboard for a brand. You’re giving a brand free advertising in your home. You’re giving a brand a direct line of communication into your home. You’re giving a brand a piece of you, and you’re paying for the privilege.I chose Mrs. Meyer’s.Mrs. Meyer’s and I have a bit of a history. Our affair started in the aftermath of Hurricane Sandy, when lower Manhattan was plunged into darkness. NYU unceremoniously evicted me and my friends from our dorm, giving us two options: sleep on a cot in the student center or find somewhere else to stay.Along with two of my friends, I chose the latter, and walked to a friend’s Clinton Hill apartment from SoHo. Google Maps says the walk should only take an hour and ten minutes, but I remember it taking at least three or four hours. (As a Jew, this experience of time dilation makes me question the Torah’s assertion that the Jews spent forty years wandering the desert.)During what I now refer to as my "Lost Weekend," some friends and I used up a lot of basic home supplies at that Clinton Hill apartment. As a thank you, we used our limited student budgets to replace all of her home supplies (and fill her fridge with alcohol). It was my responsibility to buy hand soap. In the aisles of Key Food, I stared at shelves of brands. Dial. SoftSoap. Method. But only one brand stood out to me: Mrs. Meyer’s, scented like rhubarb. What does rhubarb-scented liquid hand soap smell like, I wondered to myself. That question led to a three-years strong love affair which culminated in the purchase of an Amazon Dash Button for Mrs. Meyer’s products.

I chose No-Rush Shipping for the Dash Button – Amazon will give you a credit towards e-books if you opt for the slower shipping – but it still arrived less than twenty-four hours after I ordered it.I was surprised by how large it was. It’s not big, per se, but it’s not small, either. Most of the button is taken up by branding, which only confirms my theory that I just paid for Mrs. Meyer’s to put advertising in my kitchen.The Dash Button is also thick. The commercial Amazon made for the Dash Button features it in a variety of places – on a coffee machine, on your washing machine – but no matter where you stick it, it will stand out. In short: the Dash Button is a white chunk of plastic that has no business being as big as it is.My experience setting up the Dash Button was not smooth. Here I was, telling Amazon, Please, Our Lord Bezos, let me buy my products from your glorious buttons, but all the Dash Button said back was Attempting to connect to Wi-Fi. Actually, I wish the Dash Button said that much — all I got was a blinking light, which I learned can mean just about anything.In my case, it meant that I hadn’t set up 1-Click Ordering on my mobile device – a pre-requisite to using the Dash Button. At least, I assume it’s a pre-requisite. Setting it up fixed my issue with the Dash Button, but nothing in the Dash Button documentation explicitly said this was necessary.I will say that the way the button connects to your Wi-Fi network is pretty neat. Obviously, the button does not have a keyboard or screen. Instead, you type your Wi-Fi credentials into the Amazon app, which sends an audio signal consisting of chirps to your Dash Button.Once it connected to my Wi-Fi network, however, I was able to press the button and immediately order my first batch of Mrs. Meyer’s liquid dish soap (3 pack, 16 fluid ounces, lavender scented).

While I waited for my dish soap to arrive (it strangely enough did not occur immediately via drone), I showed my girlfriend the bulbous mound of plastic that I had installed near our kitchen sink. Instead of being immediately repulsed by the tiny, ever-present advertisement in our apartment, she was intrigued."What other brands can you get?"Thus began our descent into the rabbit hole of Dash Buttons. We carefully considered each one. Could we use a Kraft Macaroni and Cheese button? (No, too unhealthy.) What about Gerber Formula? (No, we don’t have a baby.) Maybe Gillette? (Neither of us use their razors.)

In the end, we settled on Bounty and Tide. This, I believe, is where everything went wrong. Neither of us had any personal connection to Bounty and Tide – nothing even close to the deep relationship I held with Mrs. Meyer’s – and yet, here they were, two fat pieces of plastic waiting to be shipped, ready to stink up the house with the stench of corporate pigs.We did agree, however, that it would be nice to press a button to order more Tide Pods.

Finally, two days after I initially pressed the button, my liquid dish soap arrives. It is a wholly anti-climatic event. I’m not even home when they arrive. Instead, I came home to find a small brown box stashed under our stoop. Inside is enough dish soap to last for over a month, maybe two. I will not have to press the Dash Button for weeks.

I told Amazon to use standard shipping on the Bounty and Tide buttons, believing that they would send the buttons the next day regardless of my preference just like last time (and I would still get the e-book voucher). Instead, the buttons are taking their sweet time.There was nothing to press.

I have a fever dream, which my doctor attributed to Dash Button withdrawal. "It’s amazing," he said. "I’ve never seen someone become so addicted to something in such a short amount of time." That’s exactly what I was – am still, maybe – hopelessly addicted to blatant consumerism. I needed to touch that plastic and achieve the near-instant gratification of pressing a button and waiting two days for something to arrive in the mail. 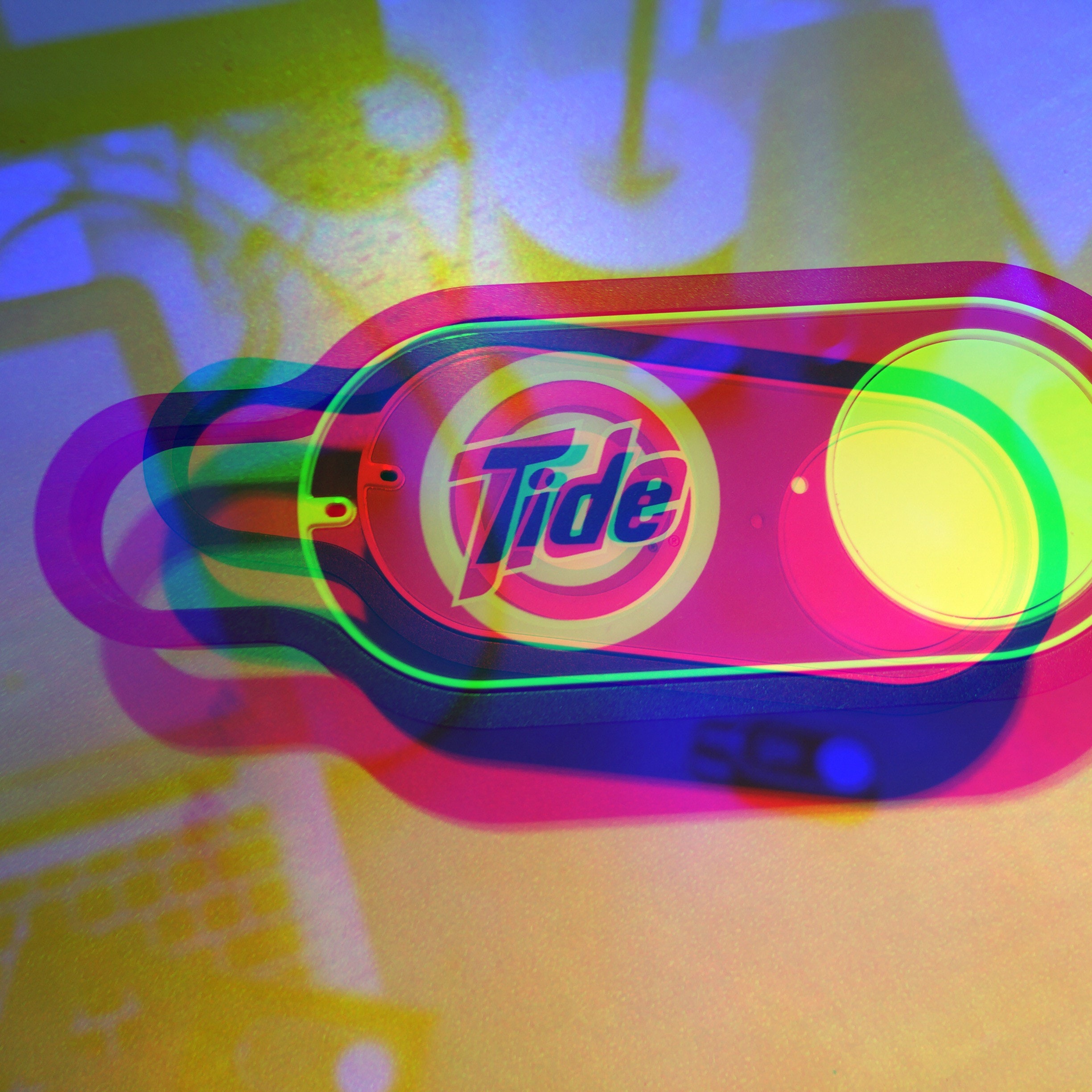 In the dream, my apartment was completely covered in Dash Buttons. Every surface had a Dash Button affixed to it. It was a never-ending rainbow of brands. As I walked through the apartment, my toes pressed buttons and ordered diapers, dog treats, and soft drinks. I looked down at my hands and realized that my hands had become spider-like: my fingers grew in length and began to touch buttons on the walls and the ceiling, ordering Larabars and mint gum and household cleaners. My eyes spun in circles – shipping notifications appeared everywhere, popping out of the floor like water out of a sprinkler. I saw Marx in the corner, crying. I saw Our Lord Bezos, face cloaked in red, laughing maniacally at the door as he delivered our latest box of consumer goods.

By this point, I’m kind of over the whole "Dash Button" thing. I mean, I can just order from the app that’s on my phone. Why do I need a piece of plastic, let alone multiple pieces of plastic, that let me do what my smartphone can already handle pretty competently?

The Tide and Bounty buttons arrive. I’ll set them up and place them somewhere in my apartment – maybe on a cupboard door, out of sight – and I’ll use them at least once in order to reclaim my $4.99. But after that? Who knows. I may use them just out of virtue of them being there, but is it really worth having a piece of plastic stuck to your kitchen just so you can somewhat more conveniently buy dish soap every two months?The end goal of Dash Buttons is a future that’s much more exciting – Amazon’s Peter Larsen told The Verge that he wants Amazon to know when your lightbulb is about to die so it can send you a replacement on the day before it happens. Until then, this version of the future is unremarkable, even a bit dull.