United, keep your $10K: One in five Americans say no amount is worth getting bumped from a flight

We’ve all seen the viral videos. Innocent passengers being dragged off planes, berated, losing seats they paid for on overbooked flights.

When this happens, we expect airlines to compensate us. But exactly how much money would it take to satisfy passengers when things go wrong on a flight?

Airline PR and customer service teams seem to be working overtime these days. This spring, United and Delta promised up to $10,000 in compensation to passengers who lose their seats on overbooked flights after high-profile incidents.

Well, a new survey from PolicyGenius^ found that just over 1 in 5 Americans (20.7%) say no amount of money makes up for losing their seat on a flight – more people than would accept any individual dollar amount. 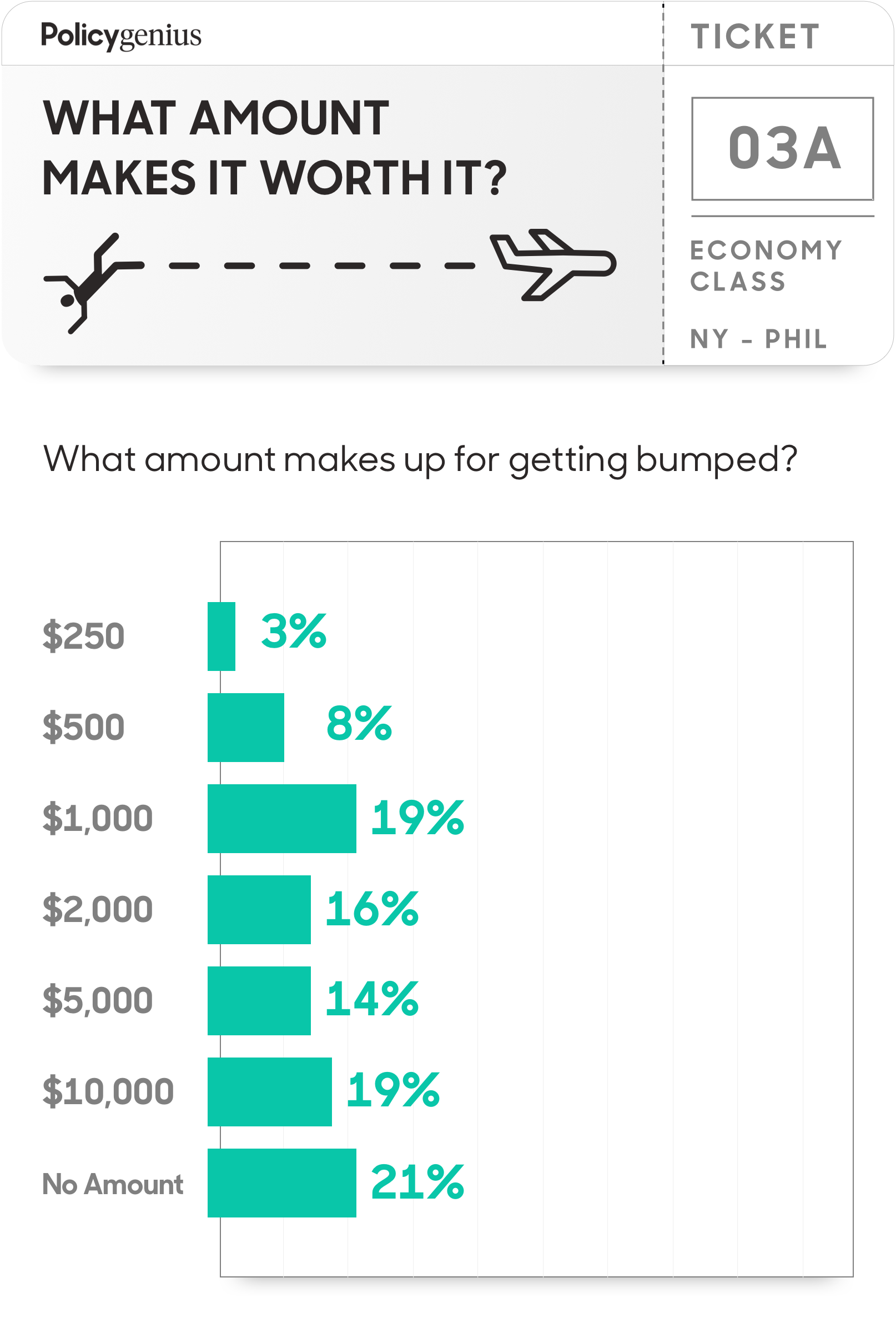 An additional half of survey respondents (48.5%) would require between $2,000 and $10,000 to feel compensated for the inconvenience. Nearly seventy percent (69.2%) say that compensation less than $2,000 isn’t worth the hassle of being removed from an oversold flight, though travel vouchers for overbooked flights are routinely offered for well below this amount.

The survey asked what compensation level would make being removed from an oversold flight worth the trouble (for leisure and business travel), as well as having to sit next to a crying baby for an entire flight. Respondents chose between compensation amounts of $250, $500, $1,000, $2,000, $5,000, and $10,000 — or that no amount would make it worth it.

The big takeaway? Americans of all stripes, across different income groups and regions, don’t want to give up their seats. More than half (55%) required at least $5,000 (or wouldn’t be satisfied with any level of compensation) to make up for the hassle.

In fact, respondents were more ready to accept compensation to sit next to a screaming baby for a flight’s duration than to be bumped from the plane. Nearly 13% of respondents said they consider $250 a good deal for putting up with all that crying, while only 3.5% said that same amount of money made up for missing their flight. 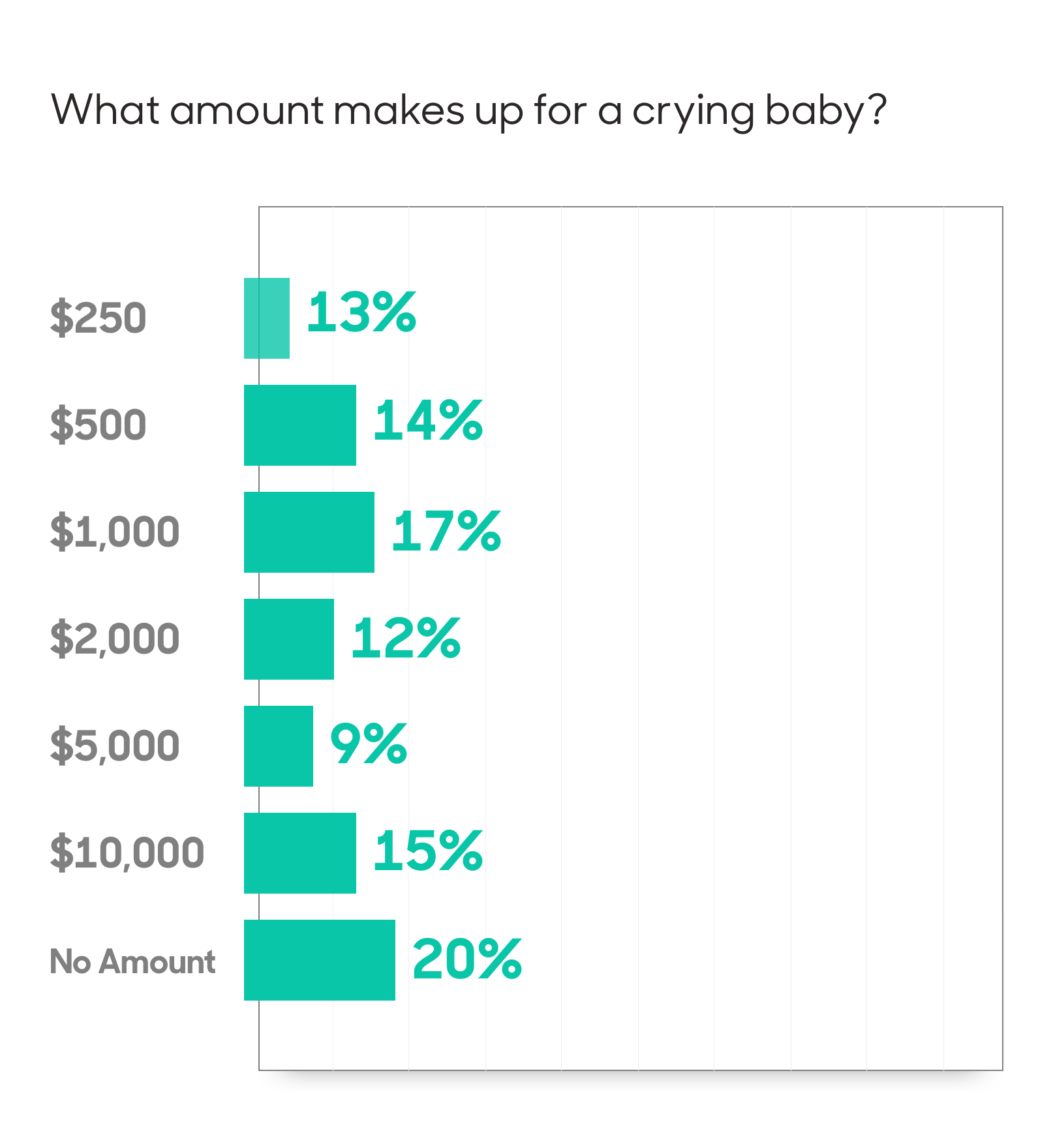 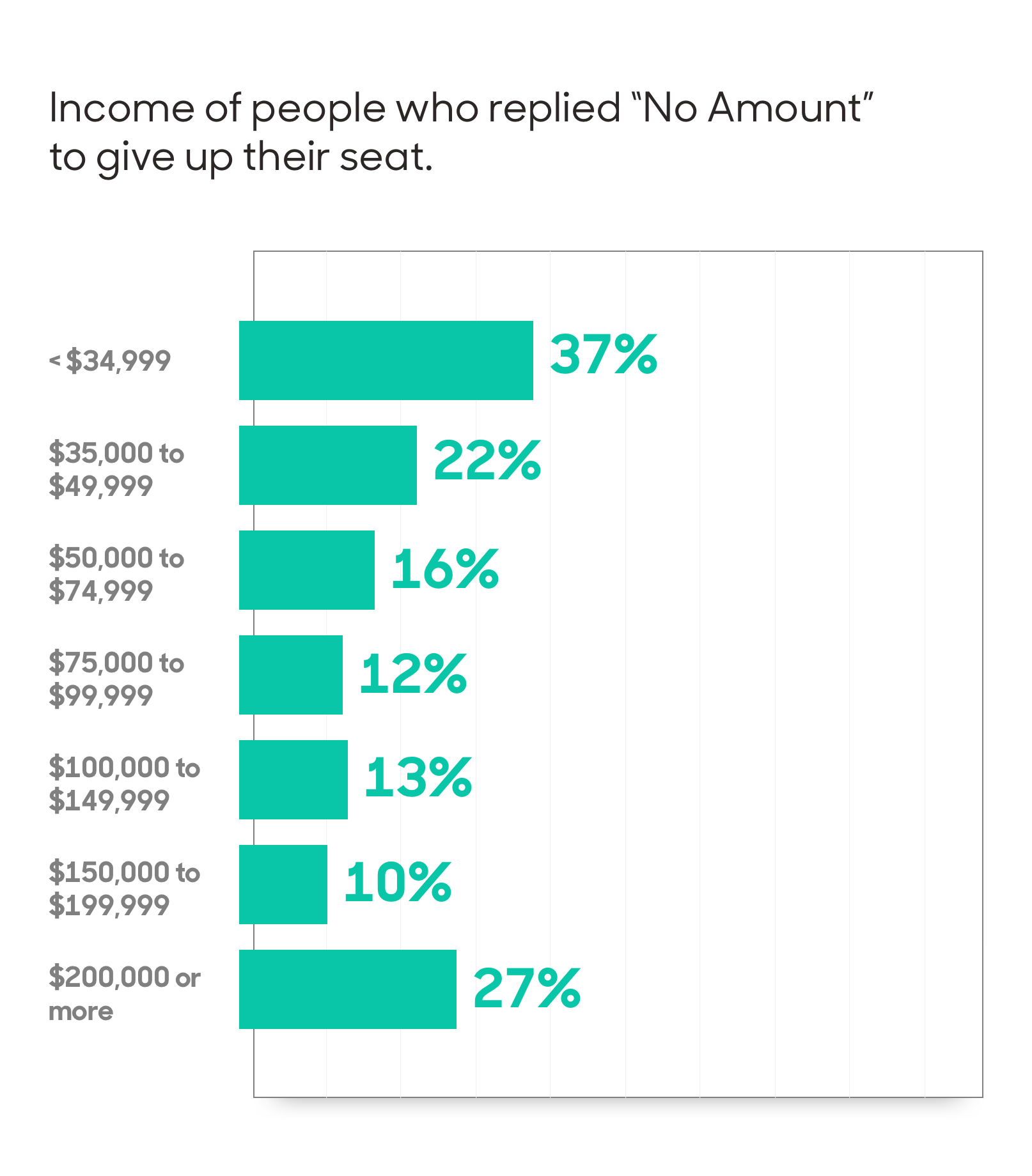 ##Parents are more willing to settle 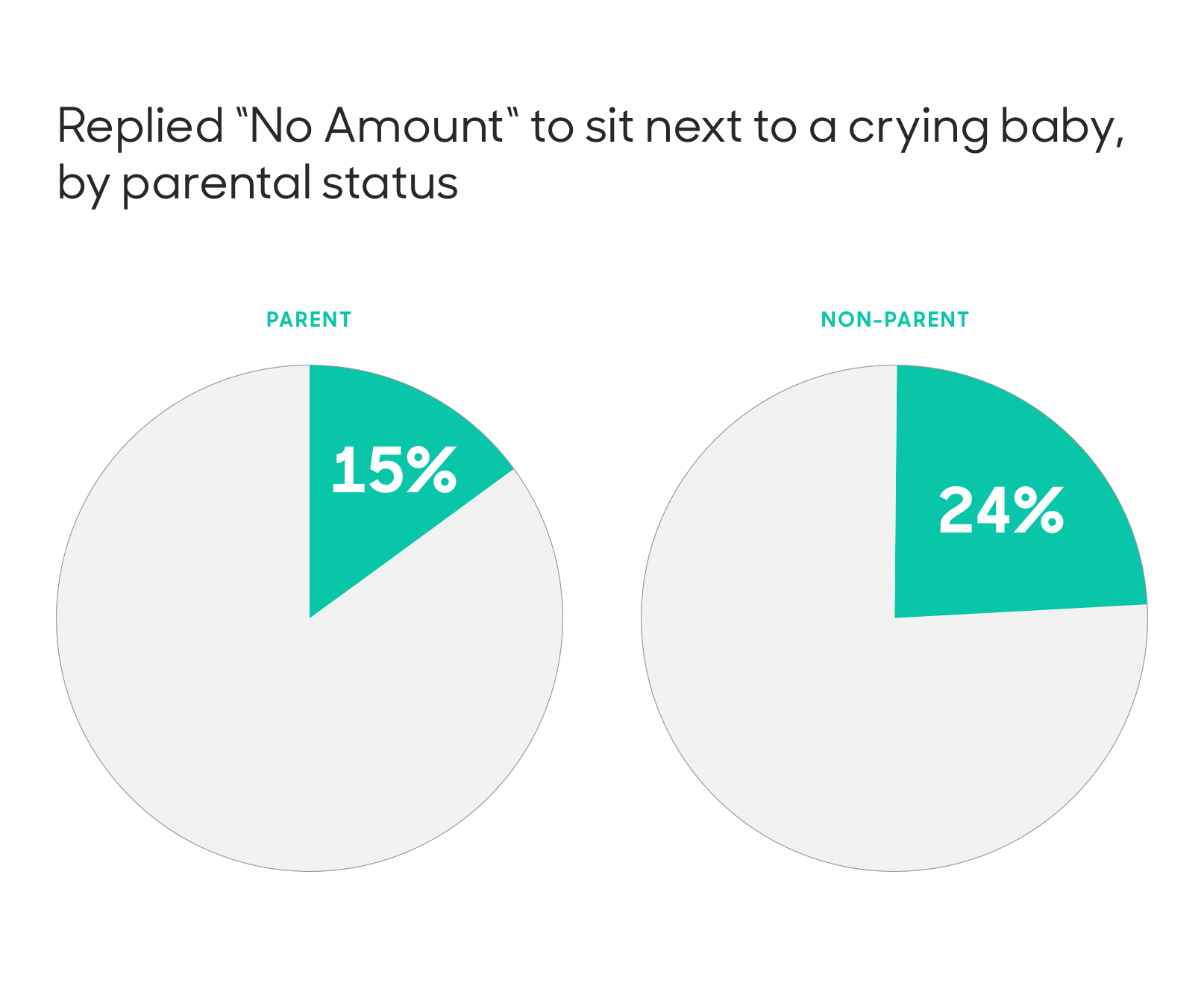 ##Have seat, will travel

Business or leisure, compensated or not, people just want to get on their flight and be on their way. We’ve seen this play out in all of the headline-grabbing airline horror stories over the past few months. David Dao was brutally dragged off of his United flight rather than give up his seat for United employees. The Schear family was kicked off an overbooked Delta flight after refusing to give up a seat they had already paid for. (Both airlines have since apologized for the incidents.)

It’s easy to say that the worst-case scenarios are getting the most attention, and perhaps they are. According to J.D. Power and Associates, overall customer satisfaction with airlines actually increased to its highest level ever from April 2016 to March 2017. (Notably, the infamous Dao incident occurred in April of this year.)

But bumping, specifically, remains a sore spot for North American travelers. J.D. Power found denial of boarding and rebooking to another flight had the greatest negative influence on a person’s overall satisfaction level. And people don’t like flight delays in general, with J.D. Power scores falling by 101 points when a traditional carrier postpones a flight and by 59 points when a low-cost carrier does the same. 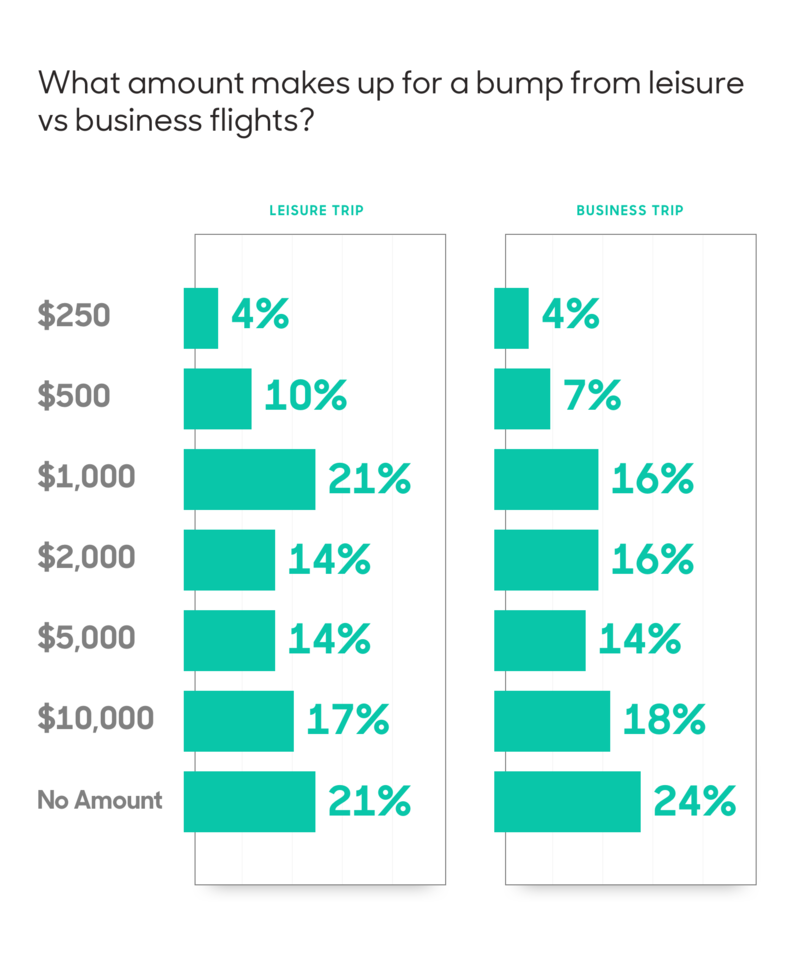 Getting “bumped” from a flight is part of the airline practice of overbooking. Basically, an airline books more passengers than there are seats so that, when the inevitable person who sleeps through their alarm misses the flight, the seat doesn’t go to waste.

Of course, there are times when everyone who bought a ticket shows up, and that’s when someone’s losing their seat — voluntarily or involuntarily.

Sadly, you likely won’t get any travel vouchers for sitting next to a crying baby (or someone who hogs the armrest). But getting bumped from a flight isn’t uncommon. According to the Department of Transportation, 46,000 passengers were involuntarily bumped from an oversold flight in 2015, and 505,000 were voluntarily bumped.

Compensation for bumping varies widely by airline, but a recent Reuters analysis of DOT data found major airlines were, on average, paying involuntarily bumped passengers anywhere from $560 to $1,600.

##What to know about your air travel rights

There are no regulations for the compensation airlines are required to provide for passengers who volunteer to take a later flight. The amount and type of compensation is an agreement between the airline and the passenger.

Involuntary bumps are a different story. The DOT has specific guidelines around what an airline must do if they’re making room on a flight.

It’s important to note Congress is currently contemplating a bill that would prohibit involuntary bumping after a passenger has already boarded the plane. If that passes, we may see a change in how airlines approach voluntary bumps – but that’s still a ways off.

For now, there’s no guarantee you won’t lose your seat, but there are a few things you can do to minimize the odds or make the most of a bad situation.