7 most expensive cities to raise kids

As a parent, you want to raise your child in the best city for their development, growth, and health. But all of that doesn't usually come at a low cost, depending on the city you live in.

Did you know kids can cost nearly $250,000 to raise from birth until they turn 18? In some places, it’s even more. Thanks to the high cost of living in some cities, monthly expenses can stack up quickly.

We looked the costs parents face every day, from setting aside money for savings to paying for school to sending your kid to summer camp, and pinned down the highest priced categories to bring you the most expensive cities to raise children – so you know where your next move will take you (and where you should just vacation) - along with some tips on making them a little more affordable. 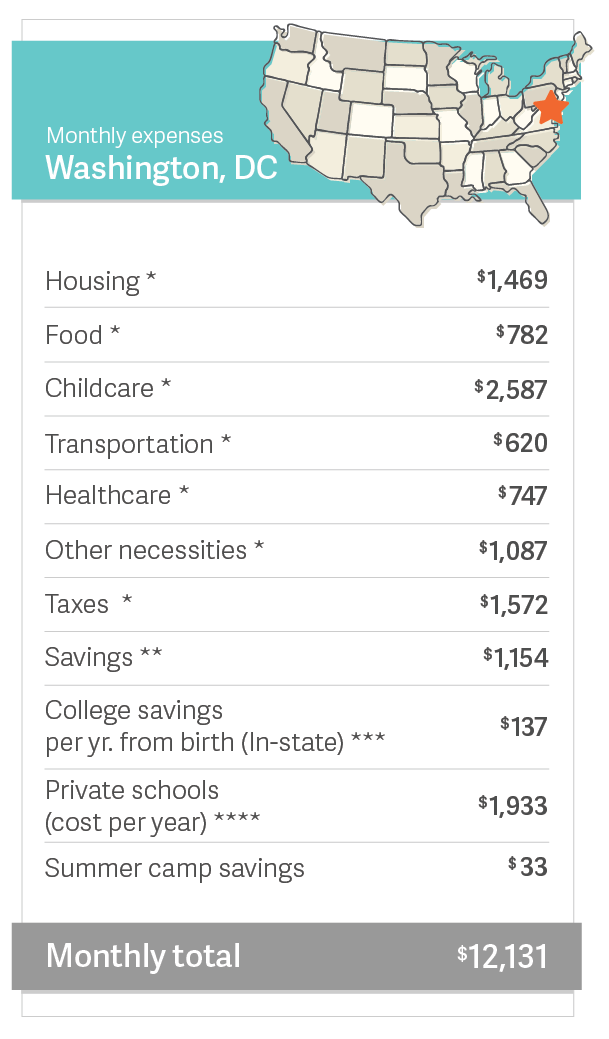 If you want to live in the nation’s capital, it’ll cost you. While DC is great for relatively cheap family vacations thanks to an abundance of museums, living there is a different story.DC tops the list of most expensive cities to raise kids thanks in large part to childcare costs. This hasn’t gone unnoticed by people, either: national news outlets have reported that the cost of an average DC daycare is more expensive than the average public college.

The other place where DC hits the wallet hard? Taxes. Between income taxes, Social Security, and Medicare, DC residents pay a hefty amount each month. Remember, though, that there are ways to reduce your taxes if you’re smart about it, like using tax-friendly investment products like IRAs, taking advantages of tax deductions, and hiring a professional to find deductions and write offs for you. 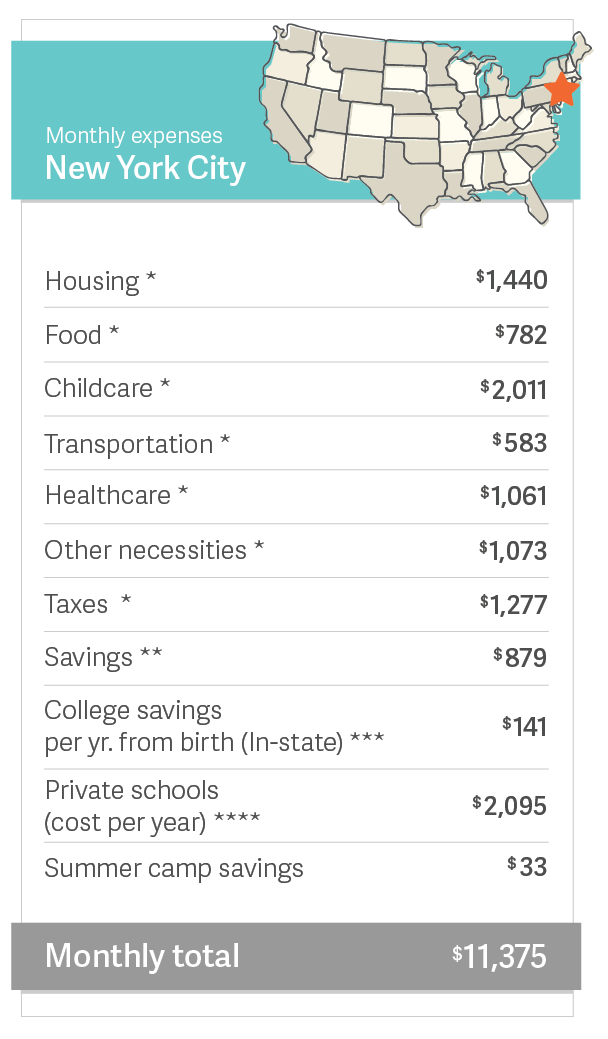 The Big Apple is known for its high costs although, surprisingly, housing costs doesn’t top the list. It comes in two areas you might not expect: healthcare and private schools.

Healthcare costs are determined by average out-of-pocket expenses and insurance premiums. You can save on both with a few tricks. For example, a flexible spending account, or FSA, lets you put money away pre-tax for use on medical expenses. So the things you’re buying anyway – bandages, glasses, and more – now come with the advantage of lowering your taxable income. Health savings accounts, or HSAs, are similar-but-different products that help you both buy medical items and save on taxes. Check out our full rundown of both right here.

When it comes to health insurance, many people are covered through their employer and don’t have much say on premiums. If you buy your own health insurance, though, make sure you have a checklist of what you should look for so you find the plan that works for you and you’re getting the most out of what you’re paying for.

Private schools are the other big kicker in NYC living expenses. Sure, not everyone sends their kids to private school, but enrollment in nonpublic schools accounts for nearly a quarter of all students in the city: for the 2015-2016 school year, students in nonpublic schools in New York City totalled over 250,000, up by more than 10,000 students since the 2012-2013 school year. 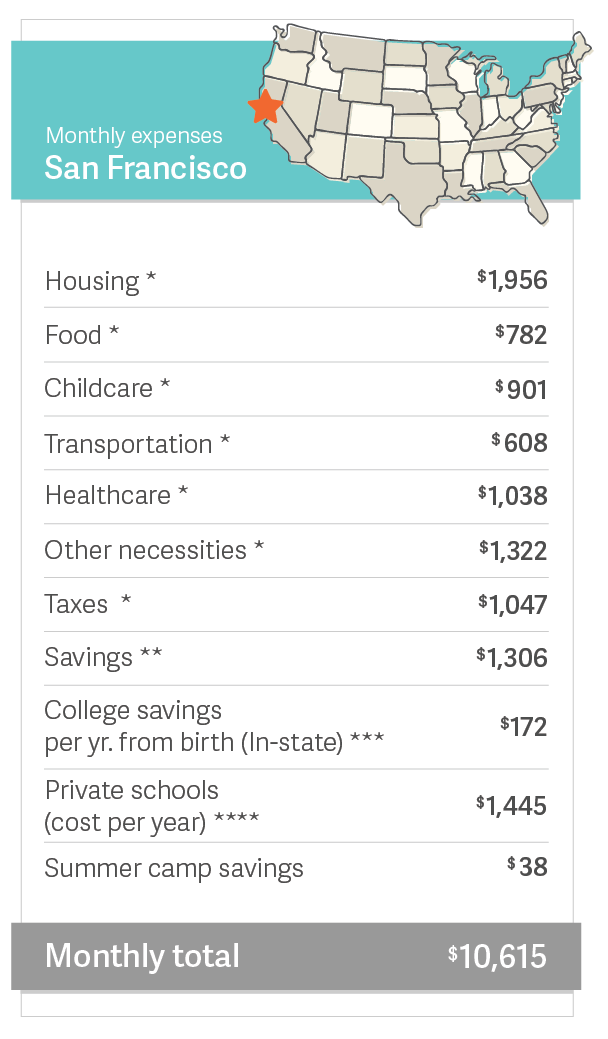 It’s not exactly breaking news that an influx of tech money has made housing costs in the Bay Area skyrocket. That’s why San Francisco’s housing costs are its biggest expense.

Besides giving up and moving to the suburbs, there’s little you can do to lower your housing costs – supply and demand is mostly out of your hands – but you can be smart about how you approach your home. If you’re looking for housing, be smart about the buying process, especially when you’re looking to buy a house with kids in mind. Also remember to take advantage of homeowner tax deductions.

And don’t be afraid to investigate refinancing your home – it may help you lower your monthly payments. 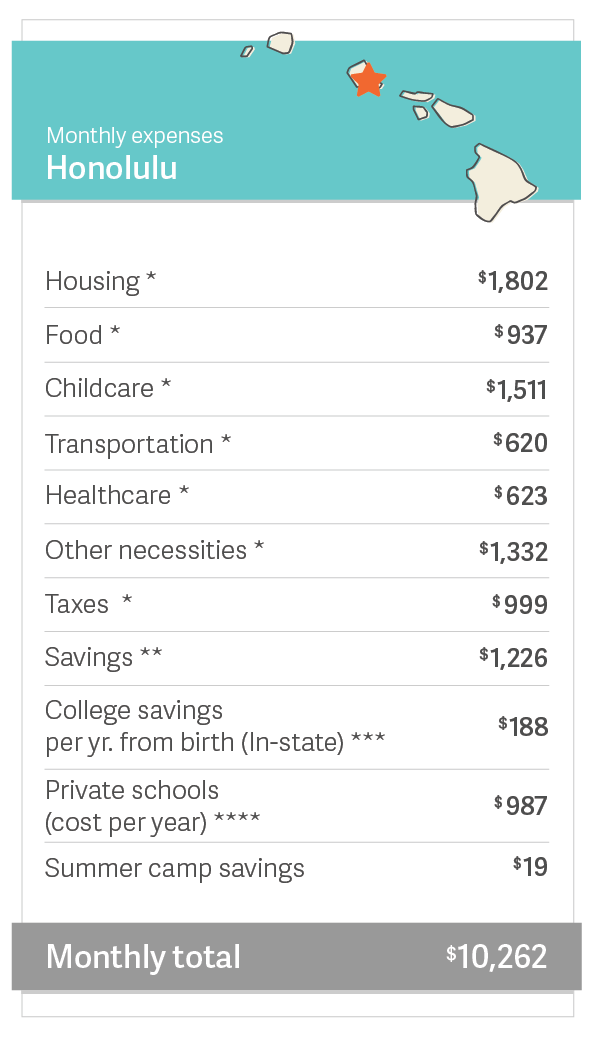 Hawaii is a beautiful getaway, even if it is considered one of the most dangerous vacation destinations in the US. It’s not just the volcanoes and trails that are scary, though – the cost of living can be, too, thanks to the price of food.

If you think about it, it makes sense. Hawaii is a little out of the way, so it costs a lot to ship food items in, and that expense is passed on to consumers. Still, by buying the right foods at the right time, buying some items in bulk, and not wasting food, you can really cut down on how much you’re paying. 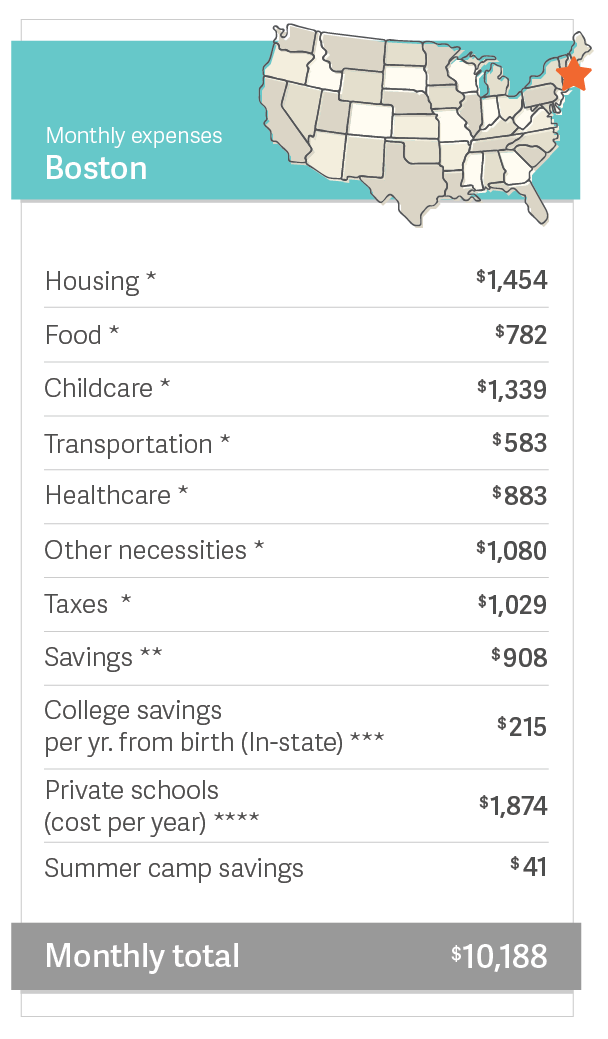 Boston is pretty pricey, but there’s one area where it actually shines on this list: transportation costs.

In fact, Boston and New York City are tied for the lowest transportation costs on our list, and the likely reason is robust public transportation systems. With a good system of buses and trains – not to mention the occasional Uber ride – residents of big cities avoid a lot of costs associated with owning cars. You’ve got maintenance costs, parking expenses, and auto insurance to worry about when you’re responsible for your own transportation.

There are some tricks to saving on your auto insurance, and if you aren’t in an area where you can hop on a subway, usage-based insurance (UBI), which sets your rate based on the number of miles you drive, could help save you even more. 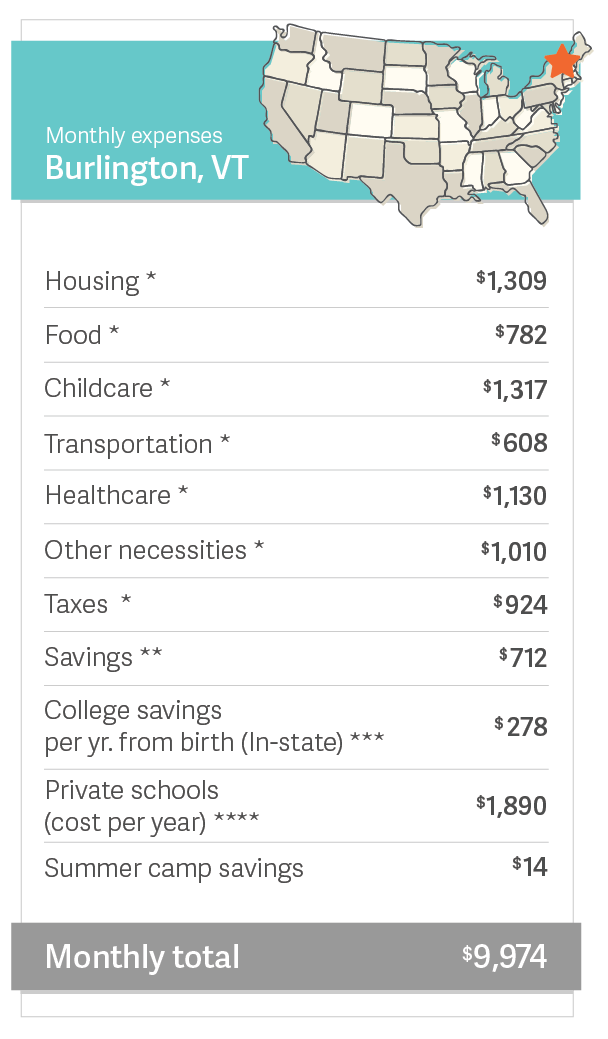 Burlington, Vermont makes the list thanks to the high cost of education. The private school costs fall only below New York City and Washington, DC, and residents need to put away a lot each month if they want junior to head off to college.

One great way to prepare for higher education costs is by investing in a 529 plan early. This helps you save specifically for higher education, and you can get some neat tax breaks, too. Overall, there’s a lot you can do early on so both you and your child are ready for college.

On the flip side of the high education costs, keeping the kids entertained during the summer when they aren’t in school is pretty cheap in Vermont. Summer camps are a great way to keep kids active, engaged, and making new friends even when they aren’t in the classroom.

And if you think it’s not worth the cost, just remember that camp is still a better alternative than child life insurance. 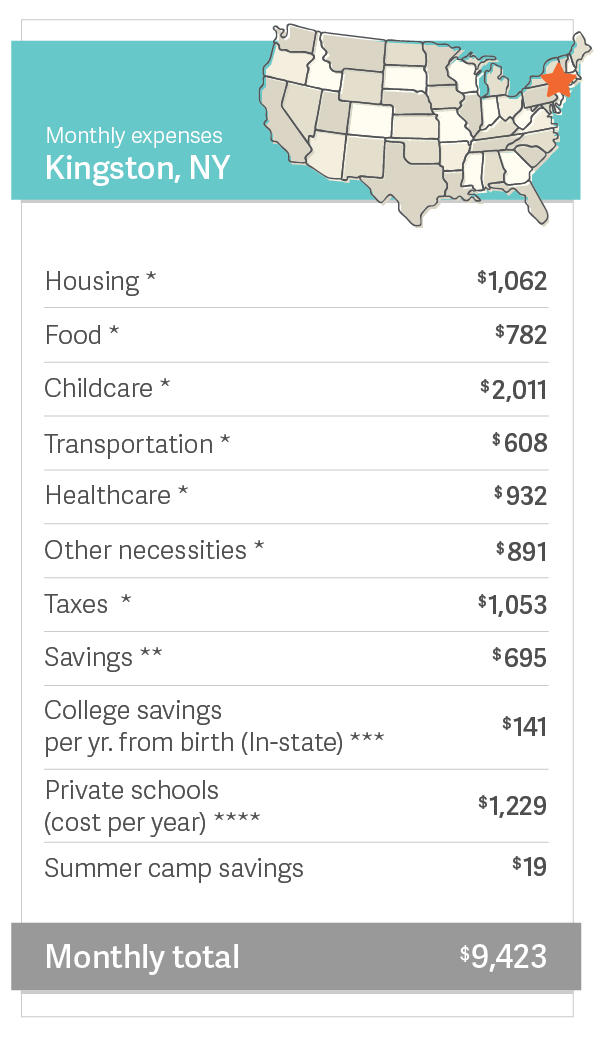 While Kingston is more affordable than its neighbor NYC, it still ranks high nationally. One thing that stands out compared to the other cities on this list, though, is savings: the amount to hit the recommended "save 20% of your income" threshold is a lot lower than the other cities.

Even if you don’t live in Kingston, though, it doesn’t have to be hard to save and prepare for the future. There are some basics you should know about budgeting, and a ton of apps that can help you. We’re big fans of YNAB for building a budget for your family.

Saving and investing is easy, too. Apps like Acorns and Stash aren’t right for everyone, but they can be useful as a low-effort way to get started investing, and Simple is an online bank that can help you save. With these tools, even residents of the biggest city can start putting money aside today.

Average summer camp prices based on: