Where do you get your news? A lot of us these days get it from Facebook, which turns into the ultimate newspaper in a lot of ways. You have your local news, national and international stories, plus the gossip rags ("Wait, who’s pregnant!?") all in one location. Facebook founder Mark Zuckerberg has articulated this as Facebook’s ultimate goal before, saying that the news feed should be "the perfect personalized newspaper for every person in the world."But there’s one major problem with getting all of your news from Facebook: for the most part, it relies on you having friends who share interesting articles. Sure, you can follow some news sources, but that will all be pushed to the bottom of the feed once Grandma shares "Obama’s True Birth Origins Revealed Once and For All."It doesn’t have to be like this, though! You can be that interesting friend sharing interesting articles! You just have to find your news from other sources first, namely, these three news apps.

I know, I know — Buzzfeed is one of those "news" sources that shows up in your Facebook feed all the time. But those are rarely hard hitting news stories. Instead, it’s stuff like "What Colors Are This Dress?" and "34 Facts You Probably Didn’t Know About ‘Harry Potter and the Order of the Phoenix’" (I knew all of them).The Buzzfeed News app, on the other hand, mostly pulls articles from Buzzfeed’s actually good News section. (If you want to know how Buzzfeed built up their investigative reporting team while still churning out viral hits, check out this Poynter article.) It also pulls articles from other news sources — the New York Times and the Washington Post, for example — if the story broke there first or is a major piece of investigative journalism. 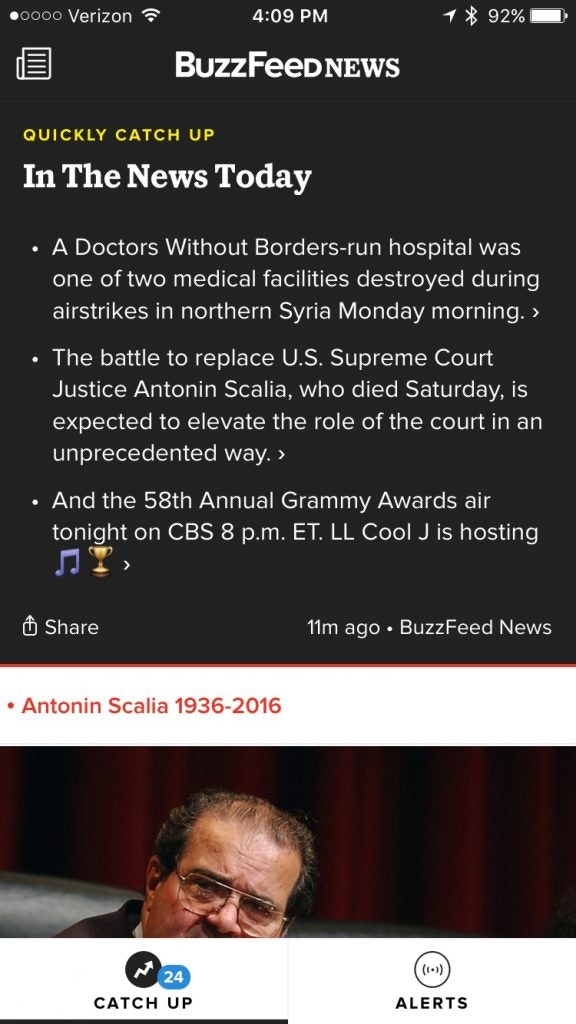 When you open up the app, you’re greeted with a few quick headlines that link to the top stories of the day. As you scroll down, you’ll get more top articles from the day, as well as groups of articles around major topics, such as Antonin Scalia’s recent death. Not every story is super serious (one example as I’m writing this is an article about a Quidditch photoshoot), but it’s about the same mix of political news, investigative reports, entertainment news, and fluff that you’re used to seeing in a national newspaper.You can also use Buzzfeed News without opening the app thanks to their "alerts" system. Buzzfeed News will send you notifications when something super important happens. If you’ve ever downloaded any other news app, you probably know what these notifications look like. But Buzzfeed News goes a step further: you can pick and choose what categories of news you want to be notified of. For example, I’m getting notifications for "Need To Know," "2016 U.S. Election," and "FIFA Corruption Scandal," just to name three.While I was skeptical of Buzzfeed News at first, I’ve found myself using it as my primary news app for the last few months, mostly because of their excellent notification system.Buzzfeed News is available for both iOS and Android.

Last fall, we published an article about apps that you can chat with, featuring apps like Lark, which acts like an interactive, robotic personal trainer on your phone. When designing their new app, Quartz took a page out of their book. Ever wanted your own little news anchor in your pocket? Now you can!When you start up the app, you’re greeted succinctly by the app and then you get your first headline. You can tap the bubble to go to the full story — usually on the Quartz site, but sometimes from other sources — or you can choose to interact with the app. You get to choose between two responses: learn more or skip. The learn more interaction typically has some sort of text that makes it appear like you’re in conversation with the app, as you can see in the screenshot below: 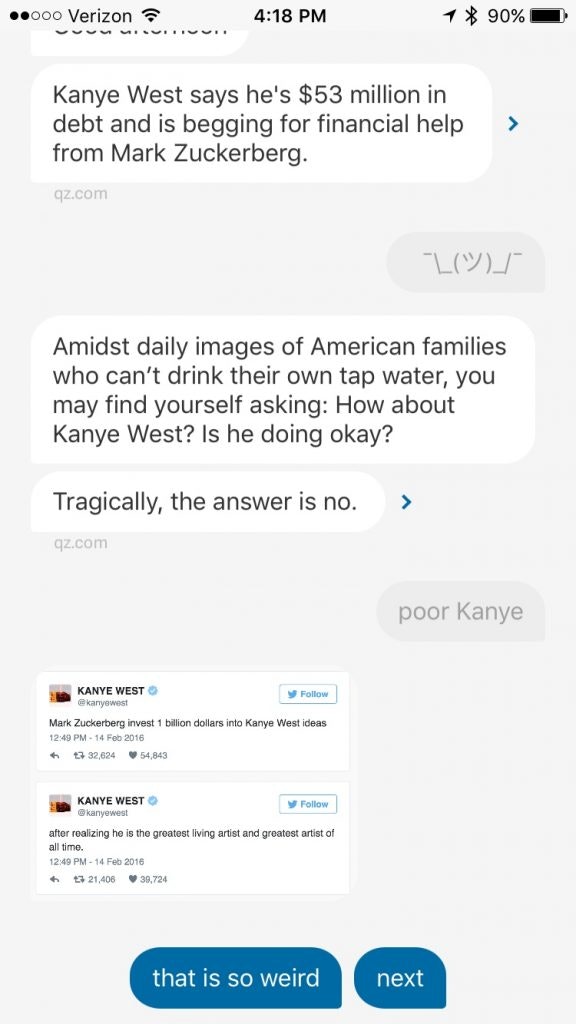 Each story usually has a few levels of this, and you skip forward to the next story at any time. Want to learn just a little bit more about Kanye’s recent Twitter breakdown? You can choose to learn more, then skip ahead to a story about a Disney cruise ship. In effect, the robot is skimming the story for you, giving you just the info you want in easily digestible chunks.It is any good? For the most part, I think the app does a good job of breaking down the news stories. I do wish, however, that it gave you more options when it came to learning more. Basically, I want to turn the news into a Choose Your Own Adventure novel, and learn about the parts of the news story that interest me most. I also think the app could do more to link stories together — for example, when Antonin Scalia died, it would be great if the app asked I wanted to learn more about the Supreme Court or what Presidential candidates have said.Overall, however, it’s a cool concept that works really well. It forces you to slow down and engage with the story, which is helpful if you’re the kind of person who finds it hard to focus on the news. There’s lots of room for improvement, but the base is solid, especially for an app that was just released.The Quartz app also has a notification system like Buzzfeed, but with significantly less customization options.The Quartz app is currently only available for iPhone.

You might be old enough to remember actually using a radio to listen to NPR, but those days are fading fast for the public radio powerhouse. NPR One is a hedge against the future. It’s an on-demand and personalized radio station that’s delivered just to you, using bits and pieces from NPR’s local and national news coverage, plus their award-winning podcasts and radio shows. Consider it NPR: Remixed.After you set up the app with your local station, every time you open it, it will just start playing audio, just like turning on a real radio. And, just like a real radio, it won’t stop until you choose to stop it. What happens in between, however, is completely different from traditional radio.Your stream will typically start with recaps of the day’s news from both NPR’s national studios and your local station. Already, that’s way more satisfying than turning on the radio to find out that you’re in the middle of a Car Talk episode. After that, you’ll get a mix of local and national stories. If you tell the app you’re interested in a particular story — for example, a science story or a finance story — it will play more like it in the future.You don’t have to just sit there and passively listen, however. You can choose stories from NPR’s many shows, episodes from their podcasts, and episodes from third-party podcasts and mix them into your listening experience. You can also search the app with keywords, which it will then use to suggest specific stories and podcasts to you. 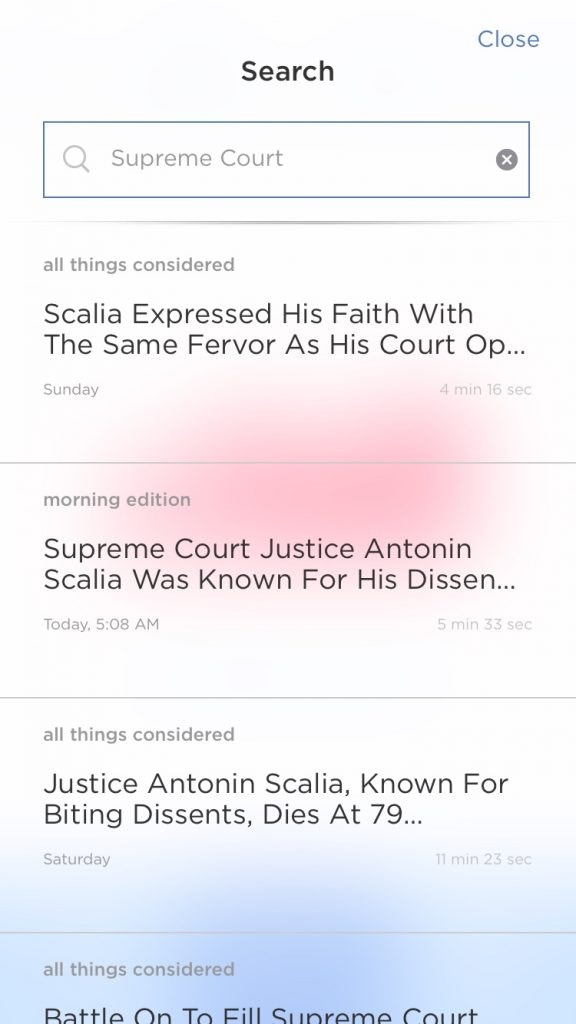 NPR One is perfect for people who commute to work by car — instead of the old school radio that came with your vehicle, you can tap into something new, fresh, and personalized thanks to your smartphone. It’s also great around the house. I love turning on NPR One in the morning while I’m cooking breakfast or just chilling on the couch. It’s perfect background noise, and in that way, NPR One is still the same old NPR you know and love.NPR One is available on iOS and Android.