There are good reasons to hate online ads.For starters, they’re annoying. Like, super annoying: they make you wait ten seconds to read a news article, or they pop up while you’re reading, or they auto-play loud videos.But they’re more than annoying: online ads can also bring huge privacy violations along with them.You’ve probably had this experience before: you look up a product on Google – for example, the new iPhone – and then you go visit an unrelated website and see an ad for the iPhone. And then you go to Facebook and see an ad for the iPhone.Isn’t that super creepy? There’s no reason that Facebook should know that you Googled the iPhone or visited Apple’s site. And yet they do! All because these sites each run twenty or thirty scripts that can follow you around the internet, watching every site you go to and building a profile so that they can send ads to you. They’ve been doing this for years – it’s how Google became Google!

Just this past week, news broke that some ad companies are using inaudible noise to communicate between your devices. That means that not only would they be able to follow you from site to site, but they’d be able to follow you from device to device. Search for "vanilla candles" on your iPhone? Guess what – you’ll get an ad from Yankee Candle the next time to visit The New York Times on your laptop.But you don’t have to just sit there and take it. You can fight back, using software called "ad blockers."Note that most of these ad blockers are extensions for Google’s Chrome browser. Though it may seem counter-intuitive to use a browser made by a company that makes over 90% of its money from advertising, Chrome is one of the most secure and customizable browsers on the market. You should definitely download Chrome now if you don’t already use it.Chrome, Firefox, and Safari all have a private browsing feature helps to block third-party trackers from following you from site to site. However, it’s unlikely that you’ll want to use private browsing all the time, as it will also limit your ability to use your browser history or persistent saved logins.Some people may prefer to run Safari, the built-in web browser for Macs, because Chrome is known to have performance issues on the Mac. We’ll note when extensions are available for Safari when applicable.

Okay, let’s start with something simple. Some people don’t care about the trackers behind the scenes – even though we definitely think you should care – and just want to be able to block the most annoying ads. Be careful picking just any old extension, however. Some companies, like the one behind Adblock Plus, have accepted money from big companies to let their ads and trackers through the blocker.

ChromeMost ad blockers work in the background, automatically blocking ads and trackers. Click to Remove Element requires the user to be more active – you have to make the choice to block a particular ad or other element on the screen. In some ways, this makes the extension more flexible; you can block other things besides ads, like a distracting GIF.Simplify web pages for accessibilityMaybe you just want to read online articles in a nice clean format. Ads obviously get in the way of that, but sometimes a website’s layout isn’t great for people who have bad eyesight or just want a cleaner experience.For that, we suggest using an extension like Readability or Safari’s Reader View (available on iOS and Mac) to strip the webpage of its layout and make the actual content much easier to read.

ChromeYou know how some blogs and news sites have big grids of spammy links at the end of each article? Those "sponsored stories" are just ads, and a lot of them lead to some pretty sketchy websites. Ad Replacer turns those spammy links into recommendations of high quality journalism from sources like CNN and the BBC. Much better stuff than "16 Ways to Lose Weight Fast Now Without Dieting!"

ChromeThis one is silly and we know it. But if you really just find ads annoying and would prefer to replace them with a picture of a skeptical looking Shiba, this is the ad blocker for you. Update: Sadly, the Doge Ad Blocker is no longer available. 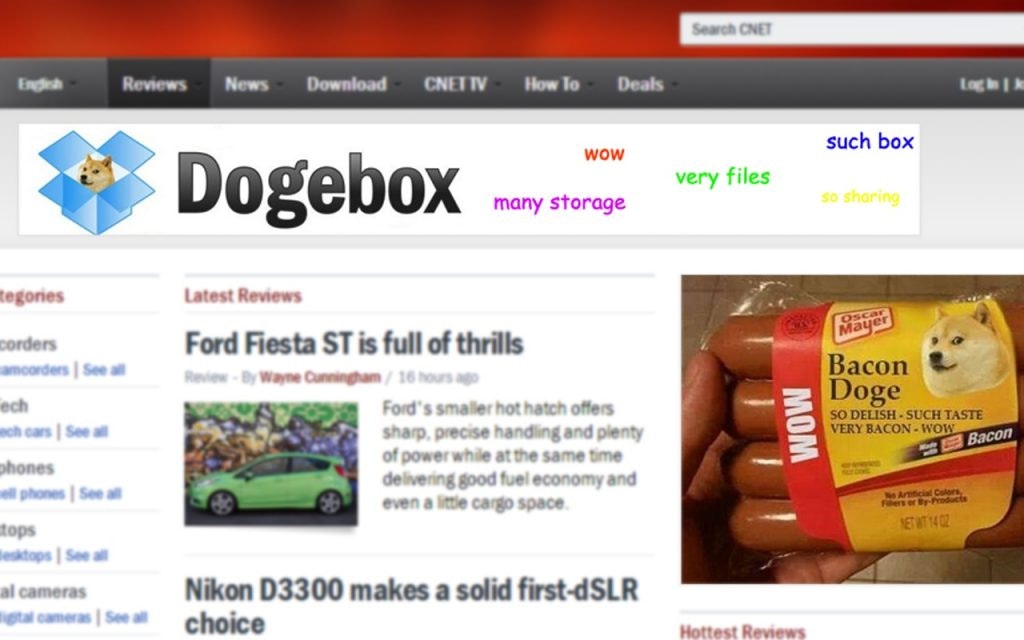 ChromeOkay, I’m not actually suggesting you download this condescending piece of software. Instead of blocking ads, The Ethical Ad Blocker blocks you from viewing any website that has any form of advertising. The Ethical Ad Blocker is working off the assumption that since websites use advertising to make money, it’s unethical to block a website’s ads – you’re stealing content, according to this argument. But when you talk to actual ethicists, as Ricardo Bilton of Digiday did, you’ll learn that "questioning the ethics of ad blocking ignores that neither publishers nor their digital advertising partners are exactly on firm ethical ground either."Here’s the thing: there are other ways to make money on the internet besides selling your users’ data. Pretending that these privacy-invading ads are necessary to make money is not only wrong, it has no bearing on whether or not ad blocking is ethical. According to Bilton’s ethicists, "readers aren’t ethically obligated to support business models that can’t sustain themselves."In my experience, the people who argue most fervently against the use of ad blockers are also the least creative in coming up with ways to serve non-intrusive advertising that respects the reader.

Protect your privacy by blocking ads, trackers, and more

If you care about protecting your privacy, you have to do more than just block advertisements. Advertisements are just the tip of the iceberg; the trackers underneath are what’s actually going to poke holes in your privacy.

Chrome, Safari & othersGhostery is far and away the best ad and tracking blocker that you can download. Why? Every time you load a page, Ghostery will actually tell you what trackers are loading, and which companies are putting them there. Even if you don’t want to block anything, Ghostery can still reveal all the crud that web pages are loading.Sometimes this list will be pretty short – maybe just Google Analytics and a few other ad companies – but most of the time, this list features dozens of different trackers from multiple companies.Just take a look at the length of the list from the New York Times: 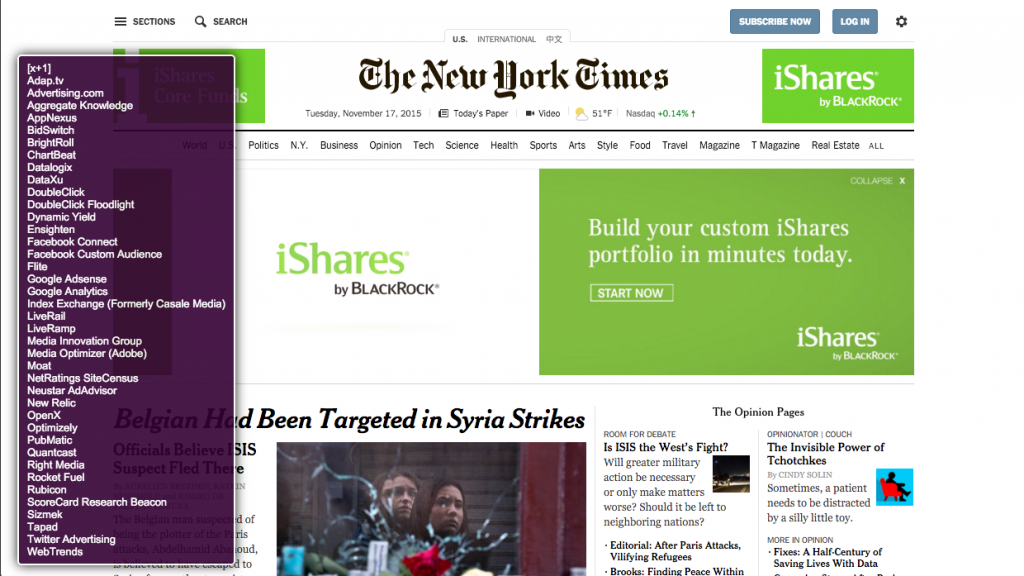 Ghostery lets you choose which ads and trackers you want to block, so if you feel okay about giving up info to Google, for example, you can. It also lets you whitelist certain websites you want to run ads on. This makes Ghostery one of the most flexible ad blockers available.

Using an ad blocker on your computer is so last decade. We’re all about content blockers now – Apple’s fancy term for iOS apps that can reach into Safari and block ads, trackers, and other types of content from loading.Mobile ads are way more annoying than their desktop counterparts. They take up the whole screen, often hijacking your phone for an advertisement you didn’t ask for. Plus, many sites make you load up to 20 megabytes of ads and trackers for a single page. For those on limited data plans, this can easily push you up against your limits. In that way, these publishers are actually stealing from you – they’re stealing data that you pay for so that they can push advertising on you.

Free, $2.99 pro upgrade1Blocker is one of the best ad blockers on iOS because of how flexible it is. You have a lot of granular control over what’s blocked and what isn’t. It makes web pages load up to 50% faster. Plus, you can whitelist sites that you want to allow ads on.

$1.99Purify is also pretty good, but it doesn’t have the same level of granular controls. But let’s be honest: you’re probably not looking for a lot of granular control. You just want your phone to load a web page within a few seconds as opposed to a few minutes. Purify is cheaper than 1Blocker (even though 1Blocker is technically free, you really need that $2.99 pro upgrade). And frankly, most of these iPhone ad blockers are going to be pretty similar; they all use the same limited API that Apple provides them.

Protect your e-mail from spammy sites

A lot of sites ask for your e-mail. Sometimes, you want to give them your email, like if it’s Amazon or a super cool newsletter. Other times, not so much. Take this example: a few months ago, I bought a ticket to see my favorite soccer team, the New York Cosmos, play at Red Bull Stadium. I had to give my email address to Red Bull in order to get my tickets. Now I get a ton of spam email from Red Bull.But while I can force Red Bull to take my email off their list, I would be out of luck if they decided to sell my e-mail to a third-party. This happens more frequently than you might imagine – sites will sell their entire list of emails to spammers for a nice fat paycheck.What can you do to protect yourself? Give them a fake email address of course, one that will still let you collect the mail you need and cut off the spammers when you’re done.

Free for limited use, $4.99 or $9.99 per month for premium subscriptionThrottle is an email service that lets you create a unique email address for every sign-up or login field. Throttle has its own inbox where you can read your mail, but it will also send a daily digest to your personal email address. Throttle will let you cut off any of your unique email addresses at any time, which means spammers won’t have any way to get into your inbox.Best part? Since all of the email addresses are unique, you can track which companies are selling your email to third parties.

Free for limited use, $39 yearly for premium subscriptionLike Throttle, Blur will mask your email address and allow you to revoke access to certain senders. If you pay the yearly (or bi-annual or tri-annual) subscription, you can also mask your credit cards, your phone number, and sync your data between multiple computers.

Unless consumers stand up and protest advertisers and publishers who have no respect for their readers, nothing is going to change. Your information will continue to be non-consensually collected by third-parties who you do not know. Many who argue against ad-blockers say that you enter into an agreement with a publisher when you visit their website: they show you content for free and you see advertising. According to them, this is how the internet has always worked.But we don’t agree to hand off identifying information to third-party advertisers just by reading a piece of clickbait, and it’s insulting to insinuate that just because we enjoy free content, we deserve to have our data stolen and abused.Downloading, installing, and using an ad blocker doesn’t just make the internet better for you. It has the potential to make the internet better for everyone who uses it.